A few weeks ago a friend of mine made a quick visit to Hungary and bought some magazines for me–Élet és Irodalom, 168 Óra, Magyar Narancs, HVG, Heti Válasz, and Magyar Demokrata. For those who are not familiar with the political orientation of these magazines, the last two are to the right while the others are to the left of center. Heti Válasz, begun on government money supplied by the first Fidesz government, is the more moderate of the two on the right. Magyar Demokrata, whose editor-in-chief is András Bencsik, one of the organizers of the Peace Marches who also had a hand in the organization of the Hungarian Guard, is a far-right publication known for its anti-Semitic references.

Quickly enough I read all the magazines, with the notable exception of Magyar Demokrata. I kept postponing reading it until this morning when I had a routine doctor’s appointment. Knowing that I invariably have to wait a long time before seeing my doctor, I decided to take along Magyar Demokrata. Let me share some of its content.

József Szájer graces the cover because the issue features a long interview with him about the attacks against the new Hungarian constitution (more below).

András Bencsik, who writes a short op/ed piece in every issue, promises that “the Peace March will continue,” although this time on the Internet. He asks supporters of the Hungarian government to send letters to foreign journalists, politicians, and representatives of civic organizations with the message of Hungarians who feel that their country is being attacked for no good reason. “The truth of a nation is like the blinding sunshine that sends light through the fog of lies.” 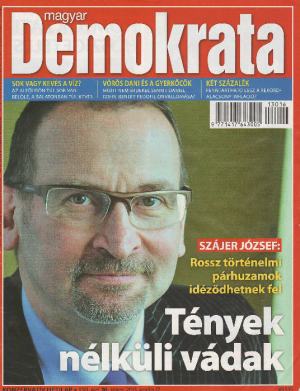 As for the Szájer interview, he and other members of the Hungarian government have repeated often enough that there is absolutely no basis for criticism of the constitution or its amendments. But here he goes further. “As far as sovereignty is concerned, I told members of the Venice Commission it is not the president of the United States, the secretary-general of the Council of Europe, or the president of the European Commission who has the right to adopt Hungary’s Basic Laws.” They will listen to suggestions but they “will not accept that instead of the members of the Hungarian parliament who were democratically elected others want to decide what is in our constitution.” Hungarians who were dependent on foreign powers during the last five hundred years are very sensitive on that issue. “We don’t like it when Comrade Brezhnev tells us what to do. Our current partners must be very careful on this score because otherwise very bad historical parallels might be conjured up.” Otherwise, Szájer couldn’t come up with anything new about the possible causes of western antipathy toward Hungary.

Another article entitled “The Secret” is by Gábor Bencsik, a nephew of András Bencsik who is a Jack of all trades. He’s written about onions as well as Miklós Horthy. He styles himself as a newspaperman and historian and is a proud graduate of Gödöllő, Hungary’s foremost agricultural school. In this piece he tries to discover why liberal intellectuals have such good connections abroad while their right-wing counterparts don’t. The left-liberal intellectual elite in the West was ready to overlook the shortcomings of the Kádár regime but sympathized with the democratic opposition of the liberals. They understood each other’s  language. The right-of-center opposition never developed a close-knit group. They did have a few meetings but then they went home. And they had no connections abroad.

Well, this is a somewhat distorted view of what happened. The sad fact is that there was no right-of-center opposition to the Kádár regime, and therefore it didn’t even occur to the few people who could perhaps be labelled “narodnik” writers to get in touch with western critics of the socialist order in Eastern Europe. Moreover, let’s face it, most of these people were isolated even linguistically. A friend of mine who lives in California told me that he was flabbergasted when he found out that the poet Sándor Csoóri spoke no language other than Hungarian. My friend served as his interpreter when he was in in this country. Well, under such circumstances it is difficult to develop a network with western supporters. Bencsik admits that the Hungarian right still has no avenues that would lead to foreign contacts but “there is hope.” Time will solve the problem; the liberals will get older and eventually die.

Up to this point the tone of the magazine was acceptable. One might not agree with Bencsik and Szájer, but one cannot criticize them for using unacceptable language or expressing racial prejudice. Another op/ed piece by László Gy. Tóth, a political scientist and chief adviser to the prime minister, however, borders on the unacceptable. It is about “Gyula Horn and History.” Here Tóth uses words that are especially objectionable from a so-called political scientist who is an adviser to Viktor Orbán. The article, which is basically a book review, looks at a biography of Gyula Horn by Árpád Pünkösti. First, Tóth describes Pünkösti as “a not too significant left-wing journalist” who tries to make an important politician out of Gyula Horn when in his opinion Horn was no more than “an uneducated communist apparatchik [and] the greatest socialist wordsmith of nothingness.” Horn is described as an immoral and unscrupulous politician who sold Hungarian national wealth to foreigners. This one-sided portrayal is jarring and demonstrates the author’s incredible bias.

When we come to István Gazdag’s article entitled “Red Danny and the Children,” Magyar Demokrata’s anti-Semitism surfaces. Gazdag goes into great detail about Daniel Cohn-Bendit’s sexual aberrations and comes to the conclusion that, although child molestation is a serious crime everywhere in Europe, most likely Cohn-Bendit will not have to worry about jail time because his fellow politicians, including Angela Merkel, will shield him. After all, most likely nothing will happen to Dominique Strauss-Kahn as nothing happened to Roman Polanski. Continuing in an ironic tone, Gazdag writes: “Only a vicious anti-Semite could possibly think that all this has anything to do with their belonging to ‘that nonexistent lobby‘. Naturally, such a claim is without any foundation. Honni soit qui mal y pense.”