A  couple of days ago I noticed a short news item in Euraktiv.com entitled “Hungary criticizes EU Commission’s ‘lack of flexibility’ on Roma policies.” Zoltán Balog, minister of human resources, who represented Hungary at the meeting of the European Economic and Social Committee (EESC),  wants flexibility in implementing the integration of schools. In fact, as we will see later, Zoltán Balog doesn’t believe in integration. This fact is well-known in Hungary, but it seems that the news hasn’t reached Brussels yet, as so many things don’t.

Balog emphasized at the meeting that there can be no uniform Roma strategy for all EU countries and therefore the European Commission has to be “more responsive” to the changes demanded by member states. However, he added, the Roma issue “is a European responsibility.” How typical. The EU is responsible financially and otherwise for dealing with the very serious unemployment and poverty of the Roma minority but Hungary will do whatever the Orbán government, specifically Zoltán Balog, thinks ought to be done. And since  Zoltán Balog doesn’t believe in integration, what he would like is to have a free hand in the matter.

Naturally, Zoltán Balog was wise enough to keep his conviction to himself, and instead he listed the government’s accomplishments in the last four years. It is true that they named an undersecretary, Zoltán Kovács, to be in charge of Roma issues. Kovács, it should be noted, failed as undersecretary in charge of government propaganda directed toward the outside world and also failed as government spokesman. It is also true that the Orbán government changed the constitution to allow separate parliamentary representation for ethnic groups and nationalities, but we know from Professor Kim Scheppele’s essay on the electoral law that it only provides for the election of one Fidesz-picked MP to represent the Roma community while it deprives Gypsies of the right to cast a vote for the party of their choice. That’s why Aladár Horváth, a Roma activist, urged Gypsies not to register as Gypsies and organized a separate Gypsy Party which will have 60 candidates running in the next election. Balog also talked about “training schemes in sectors such as masonry, forestry, and construction aimed at giving Roma the necessary skills to find a job on the market.” I must say this is new to me.  The only thing I have read about, in article after article, are the absolutely useless classes that prepare the chronically unemployed for nothing.

It was at least three years ago that I gained the distinct feeling that Balog, then still undersecretary in charge of Roma issues, wanted to “outsource” the problems associated with the Gypsy minority’s economic and social difficulties to the churches. He kept talking with church leaders, emphasizing their unique talents for such tasks. Although he tried to dump the whole thing onto the churches, he didn’t quite succeed. However, as the churches took over more and more schools, some poor segregated schools ended up in their hands. 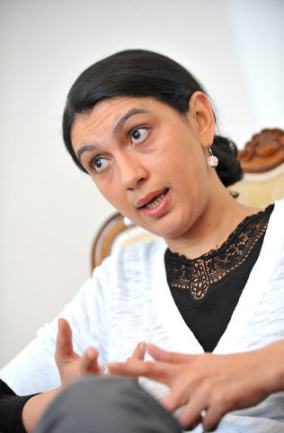 Enter a foundation that has been fighting for a number of years for the rights of children coming from disadvantaged backgrounds (Esélyt a Hátrányos Helyzetű Gyerekeknek Alapítvány). The Foundation has been trying to mediate between parents and schools to achieve integration. But since it is becoming obvious that the government itself doesn’t stand behind integration efforts, the Foundation has only one recourse: to go to court.

Lately, the Foundation had an important win against the Greek Catholic Church, which has two schools in Nyíregyháza: one elite school and one segregated school. The school that is currently segregated had been closed earlier and the children were bused to the school downtown, but after the Church took over, the segregated school was reopened.

For one reason or another Balog is enamored with the plans of the Greek Catholic Church in Nyíregyháza. He sees this particular school as the “citadel of convergence” for Roma students. He imagines integration as a two-step effort: first you put the disadvantaged, mostly Roma, children into segregated schools where “they will catch up.” Once they achieve the knowledge and skills in these segregated schools equal to that of students in the “white” schools, the Roma children can be integrated into the mainstream population. We know that this is nonsense. American segregated schools were also supposed to be “separate but equal,” which of course they were not. According to Erzsébet Mohácsi, president of the Foundation, Balog believes that there is good and bad segregation. His segregation will be excellent, of course.

The Foundation won the case against the Greek Catholic Church where Balog went so far as to be a witness for the defense where he argued for segregation before the judge. Although the Foundation won the case and therefore the Greek Catholic Church is supposed to close its segregated school, it became quite clear during the proceedings that the good Christians have no intention of integrating. The judge apparently asked whether they could find places in the Church’s downtown school for 12 children who just started first grade in the segregated school. The representative of the Church, after some hesitation, announced that perhaps they could create a new classroom directly under the roof. The judge was taken aback and tried to explain to him what the suit was all about. The answer was that the students couldn’t be integrated into the existing classes because it would be “harmful to the other children.” Balog after the trial announced that the verdict “is a sad commentary on the judiciary, which denies parents’ right to a free choice of schools.”

I might add that Balog found an ally on the European Economic and Social Committee in Brussels– the president of EESC, French politician Henri Malosse. He praised Hungary’s efforts. He visited Hungary and was very impressed because “pupils have knowledge about the Roma culture” there. He also called the critical coverage of events in Hungary “disinformation.” Although Malosse has a degree in Russian and East European Studies and speaks Polish and Russian, he seems to know little about Hungary. It is hard to believe that he would approve of segregated schools for Roma students as the norm in Hungary and elsewhere. Members of the Orbán government are very good at hiding their true intentions. Let’s hope that the hidden agenda will not remain hidden for long.