I will continue yesterday’s discussion of Viktor Orbán’s speech at Tusnádfürdő/Baile Tusnad because I didn’t cover some important topics. Moreover, at the time of the post’s writing I had access only to Orbán’s speech and not his answers to questions from the audience. Since then I have read a summary of what transpired in the hour and a half after the prime minister finished his speech.

I should emphasize that the Tusnádfürdő extravaganza was organized not by RMDSZ, the largest Hungarian party in Romania, but by the Erdélyi Magyar Néppárt (EMNP) headed by Tibor T. Toró. So, the enthusiastic crowd came from the more radical right in Transylvania, from those who enthusiastically supported or most likely initiated the reburial of József Nyirő whose political sympathies lay with Hitler and later Szálasi. The other important speaker was László Tőkés, who is the chairman of an organization called Erdélyi Nemzeti Tanács which is in close alliance with EMNP.  An RMDSZ politician who was originally chosen to deliver a speech was forbidden to participate.

By way of background, Tasnádfürdő is in the Szekler region. The Szeklers  live in the counties of Hargita/Harghita, Kovászna/Covasna and Maros/Mureş and for a numbers of years have been demanding territorial autonomy which the Romanian majority refuses to grant.

And as long as I’m bringing up Hungarian minority politics I might as well return to a part of Viktor Orbán’s speech that I didn’t touch on yesterday. It was his close to incomprehensible discourse on the concept of  the “world nation” (világnemzet), a word that at least until now didn’t exist in the Hungarian language. Among the compound words starting with “világ,” “világcég” means “international company” and “világnyelv” means “language widely spoken.” For example, today English is a “világnyelv.” 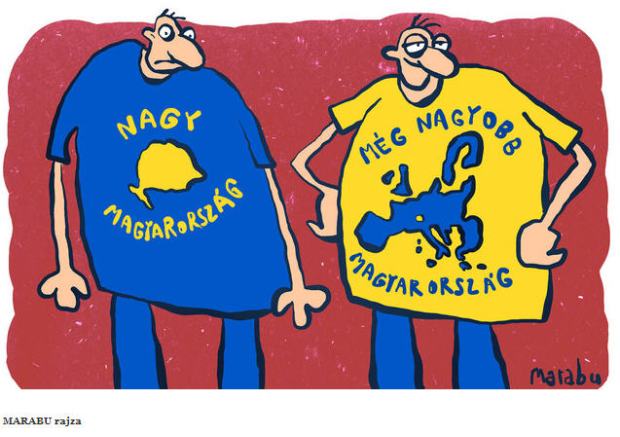 I guess a “world nation” means that there are Hungarians all over the world but regardless of where they live they all belong to the nation. That is simple enough, but what are we going to do with the following claim? “We must find a way that the Hungarian from Budapest, or rather from Felcsút, the Hungarian who lives in New York or in Argentina will all prosper.”

In my opinion, he can look high and low but he won’t find a way to achieve this, How could he? He has no power over the lives of those who live on a permanent basis in other countries. But it seems that his mind works differently from mine because he claims to have found the key to solving this problem. What is necessary, in his opinion, is “a strong Hungary.” He will draw all these people “into the new political and economic order that is being built by the two-thirds majority.” How, may I ask? But such practical questions don’t seem to occur to his admirers.

The same thing is true about Orbán’s deputy, Zsolt Semjén, who went even further when he claimed that if the Hungarian minorities totally assimilate sometime in the future in Ukraine, Romania, Serbia, and Slovakia, Hungarians altogether will disappear from the face of the earth. What is the connection? Why does the fate of the Hungarians of Hungary depend on the Hungarian minorities in the neighboring countries? There are, of course, no rational answers to these irrational statements, but that doesn’t seem to bother these people.

In the last couple of days I have been listening to a lecture series on the structure and the laws of the European Union. One of the lectures concentrated on the EU’s stages of development from its beginnings. The lecturer emphasized the fact that the Union even today is an entity in constant change. Something still in the making. The trend is toward closer and closer integration, especially since the crisis of the eurozone. Viktor Orbán will not be able to stop this trend and he can only lose this war. He may win a battle or two, but he will not succeed in transforming the European Union to his own liking.

It seems that Orbán was carried away during the Q&A session when he revealed the “secret”of how he fools the European Union. For example, the EU insists on changing certain passages in the new constitution. Eventually the Hungarian government obliges but at the same time they change a few more words here and there. The final result is that the European Union would have been better off if it hadn’t insisted on the changes at all. What upright behavior! And he is even proud of it.

And, continuing my random thoughts, here are a couple of corrections to Viktor Orbán’s figures. He claimed that since 2010 the Hungarian national debt was reduced through his efforts from 85% to 79% of GDP. A lie. Not since the mid 1990s has the national debt been at 85%, and at the moment it is climbing to a new cyclical high. It currently stands at 81.3% of GDP. Paying back the IMF loan early actually means borrowing money at a higher interest rate to repay a loan with a considerably lower interest rate. But according to his admirers, including László Tőkés, sending the IMF packing is a patriotic act.  As Tőkés said, “as in 1989 a young man sent the Soviets home today the same man with graying hair sent the IMF home.” Another lie. Viktor Orbán didn’t send the Russians home in 1989. Their departure had already been arranged between the Németh government and Mikhail Gorbachev’s Soviet Union.