Today Index came out with the first of a two-part article on the mass fraud surrounding the acquisition of simplified Hungarian citizenship. The article claims that a group of Ukrainians with the active assistance of corrupt Hungarian officials has been procuring Hungarian citizenship for foreigners who are ineligible: they have no Hungarian ancestors and don’t know the language on even a rudimentary level. The article claims that their numbers might be in the tens of thousands.

The Index article made a real splash and MSZP, as is its wont, again demanded the resignation of Zsolt Semjén, deputy prime minister, whose job is the recruitment of as many Fidesz voters from the neighboring countries as possible.

The website indicated that applicants need have no Hungarian ancestry, did not have to learn Hungarian, and did not even have to appear in person to have an interview or receive their citizenship. Of course, extra services like forging documents to invent a Hungarian grandpa or grandma will cost extra, anywhere between 6,000 and 25,000 euros depending on how complicated the task is. Grateful clients sang the praises of the organizers.

In May 2013, in an interview with  Átlátszó.hu, Miklós Kovács, president of the Kárpátaljai Magyar Kulturális Szövetség (KMKSZ), openly talked about the corruption of Hungarian authorities who hand in hand with the “Ukrainian mafia” handed out citizenship to anyone who was ready to pay them off. Kovács most likely underestimated the price when he thought that for a mere 500-1,000 euros someone could be the happy owner of a Hungarian citizenship document. A Subcarpathian Hungarian-language site claimed to know at that time that a Ukrainian citizen could get Hungarian citizenship for 5,000 euros, but if the person is from another former Soviet republic the price is higher: 9,000 euros. Lawyers took care of missing Hungarian ancestors. All that was done through “legal” channels. 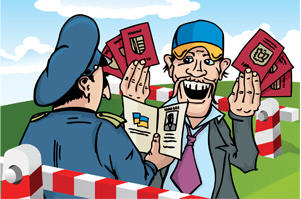 In November 2013 Nick Thorpe of BBC, reporting from Subotica, Serbia, described his encounter with a brand new Hungarian citizen who did not seem to know a word of Hungarian. Or at least he looked blank when Thorpe greeted him in Hungarian. “He does understand it—he just doesn’t speak it very well yet,” said the man’s female companion. Thorpe found 50 people working furiously to handle the demand for Hungarian citizenship. They were receiving 800 calls a day. And every day 100 new Hungarian citizens emerged from the consulate in Subotica. The BBC article is entitled “Hungary creating new mass of EU citizens.” To be more precise, Hungary is creating future citizens of Germany, the United Kingdom, the Netherlands, Austria, and Sweden, the countries preferred by East European migrants.

Thus today’s revelations by Index are not new, but they are definitely the most thoroughly researched. According to Bálint Szalai, the journalist who investigated the case, Ukrainians and Russians gather around Deák tér in downtown Pest to negotiate with Ukrainian and Hungarian “businessmen” over the details of becoming Hungarian citizens. Most of them speak no language other than Ukrainian or Russian, but last year the journalist lucked out: he found an English speaker who revealed that his father had already received Hungarian citizenship and now works in Germany. The rest of the family is waiting for the swearing-in ceremony. They will be Hungarian citizens within a couple of hours. Then they will follow him.

The citizenship law enacted in a great hurry in 2010 demands only one ancestor who was a Hungarian citizen before 1920 or between 1940 and 1945 and some minimal knowledge of the language. The citizenship business began in earnest in Ukraine. Ukraine forbade dual citizenship, and therefore Ukrainian-Hungarians were afraid to ask for a visa to Hungary to handle their citizenship applications in person. Therefore, paid agents represented the applicants in some Hungarian village’s town hall where they paid off the local officials. The price of citizenship was between 5,000 and 30,000 euros. Szalai describes one case where, in a village near Kisvárda, the mayor received 200 applications at once. He demanded 1,000 euros for each, which he got. It took him 20 minutes to sign them.

Soon enough it became known that through the Ukrainian network a person could easily receive Hungarian citizenship without much scrutiny. Applications were pouring in with forged birth certificates of non-existent ancestors. Shortly afterward Russians became interested in this fantastic deal. First, the Russians had to acquire Ukrainian identity in order to claim Hungarian ancestors. It would be hard for a Russian to prove that his ancestors were Hungarians. Companies and lawyers specialized in making Russians first Ukrainians and then Hungarians. The citizenship business is apparently still thriving.

The reason that the news made greater waves this time around is because it appeared on a widely read internet site. According to opinion polls, something like 75% of the population are not keen on the citizenship law as it now exists: people don’t like the idea that their fate can be determined by votes coming from abroad. And in fact, in the last election, if we can believe the information given out by the government, the two-thirds majority was determined by the 100,000 mostly Transylvanian voters. Simply put, Viktor Orbán must thank the Hungarians in Romania for his practically unlimited power. Reading that tens of thousands of foreigners who have never had anything to do with Hungary are all over the world now with a Hungarian passport only adds to their anger. The government’s reaction? Tamás Wenczel, undersecretary in charge of “nation policy” (nemzetpolitika) under the watchful eye of Jámos Lázár, immediately threatened Index with a law suit. He did not deny that there have been “irregularities.” However, “lately several measures were adopted that would preclude the possibility of abuse.” Wenczel did not elaborate on the measures, but as long as every village town hall can grant citizenship to foreign nationals the abuse will continue and with it the thriving business on both sides of the border.