In liberal circles almost everybody is certain that the warnings of Bill Clinton and Barack Obama will not inspire Viktor Orbán to abandon his relentless pursuit to make the very existence of independent civil groups impossible. In fact, the smear campaign has only intensified in the last couple of days.

Official Hungary is quiet on the subject unless one can take seriously the comments of a newcomer to the ministry of foreign affairs and trade, Undersecretary Mónika Balatoni, who just can’t get over the fact that “western Europeans don’t understand us,” the freedom-loving people of Hungary. After all, already in St. Stephen’s time Hungarians “chose Christianity.” And there is Tibor Navracsics, whose “European commitment cannot be questioned.” This is, of course, merely a repetition of Szijjártó’s reference to freedom-loving Hungarians.

It is true that the Christian Democrats chimed in by repeating the government’s claim that Obama’s criticisms are groundless. In their opinion, the attack on Hungary is taking place because the Hungarian government opted for Christian democracy instead of liberal democracy. Jobbik naturally is on the side of the government with the difference that they say what the Orbán government does not want to: The president of the United States “openly admitted that his country constantly interferes in other countries’ internal affairs.” Since Obama talked about the United States’ national security, which is served by the existence of strong civil groups, Hungary in turn should restrict the foreign-financed groups which pose national security risks to Hungary.

But the real dirty work is being left to the government media and so-called  pro-Fidesz “political scientists.” In the political scientist category there is Gábor G. Fodor, “strategic director” of the Fidesz think tank Századvég. According to him, Obama’s speech was not about Hungary and other authoritarian regimes but about the United States. The speech shows the weakness, not the strength of America. After all, the president spoke of “national security interests.” And because of Obama’s confession about American national security interests, “it’s possible the Norwegian monies don’t come from Norway.” In plain English, the United States is funneling money into Hungary and other countries through Norway.

Spiler, a blogger, goes farther than Fodor. He notes that George Soros and Norway are the most generous supporters of the Clinton Foundation, and the same George Soros and Norway support Hungarian liberal groups. With a leap of logic our blogger lays the groundwork for a charge of conspiracy. Perhaps Clinton’s critical comments are payment for the generosity of George Soros and the government of Norway. On the basis of Spiler’s blog, Szilárd Szőnyi of Válasz is already talking about George Soros’s “civilian armies.” He describes Spiler’s post as a reliable source on the Soros-Clinton-Obama-Reykjavík axis. (I trust he doesn’t think that Reykjavík is the capital of Norway.) 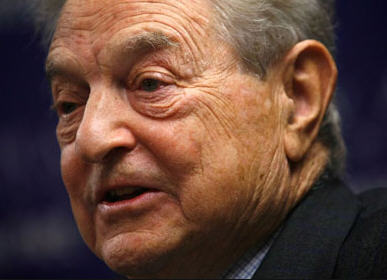 The attack on the Hungarian civil groups was intensified by an article that appeared in the print edition of Heti Válasz today. The author is Bálint Ablonczay, a journalist with the reputation of being a moderate Fidesz supporter. But it appears that when the chips are down and the regime he supports receives harsh criticism from important sources, Ablonczay becomes a fierce defender of the regime. In this article, which is not available online, he justifies the Orbán government’s harassment of the civil groups by trying to prove that these NGOs are not really independent but are “liberal activist groups.” After all, they approach the question of abortion only as a women’s rights issue. They are interested in families only as places of domestic violence. Or they concentrate on alternative lifestyles. Finally, he cites an article published by an Israeli organization, NGO Monitor. It was written last year by Alexander H. Joffe, who claimed that the Soros-supported NGOs were adding to Israeli-Palestinian tensions. His conclusion is that Soros’s network is a powerful international tool that works against individual governments through these civil groups.

Ablonczay did a lousy job at fact checking. Csaba Tibor Tóth, a blogger, immediately wrote a post with the title “Heti Válasz and the Israeli Right against Soros.” NGO Monitor’s founder and president worked for a number of years in Prime Minister Benjamin Netanyahu’s office. The organization is really an arm of the present Israeli government, which hates the Israeli NGOs about as much as Orbán hates the Hungarian ones. NGO Monitor finds all independent groups “extremists.” Even groups attached to the UN are extremists. According to Tóth, NGO Monitor is something like the Hungarian CÖF, except much more sophisticated.

Magyar Nemzet published an article today about an alleged Soros conspiracy. The paper learned that George Soros cast his net over the civil groups. It was George Soros who financed the organizations in charge of the disbursement of the Norwegian funds throughout Eastern Europe. The article lists Romanian, Polish, Estonian, Lithuanian, Slovenian, and Bulgarian NGOs somehow connected to George Soros’s Open Society Foundation. The implication is that there is a supranational network organized by George Soros to do what? To topple these governments? How is it that no other governments in the region sent a squad of policemen to the office of one of these disbursement centers or suspended the tax numbers of all of them? Are they not worried about this conspiracy?

The problem is not with Clinton, Obama, the Norwegian government, George Soros or the NGOs but with Viktor Orbán’s government. They can concoct conspiracy theories to their hearts’ content about a supranational global attack on Christian Hungary, but I doubt that anyone will fall for that nonsense with the exception of Hungary’s right-wing voters.

I often wonder where Viktor Orbán manages to find the characters he surrounds himself with. A former auto repairman is apparently the brains behind the Fidesz propaganda machine. Another new star is a man who knows practically nothing about either economics or business practices but who expounds daily about the blessings of lower utility prices. A former pastry chef is the chief spokesman for the party. The auto repairman is practically invisible, but the others are very much in the limelight.

Stars come and go in the world of Fidesz. Orbán often has a sudden new favorite who catches his eye, and in no time this person finds himself in a very important position. The former favorite is unceremoniously dropped. The chief is, however, generous with those who fall from grace. An important position in some office or state company is normally awarded as a consolation prize.

It was perhaps the rise of Péter Szijjártó that was the most spectacular. At the age  of 20, straight out of high school, he became a member of the Győr City Council. A year later he established the local chapter of Fidelitas, the youth organization of the party. At the age of 23 he acquired a high position in the party hierarchy on the county level. During these years he also attended Corvinus University. Straight out of college he became the youngest member of the Hungarian Parliament in 2002.

After 2006 he was promoted to occupy the important position of Fidesz spokesman. He headed the “parrot commando,” as the Fidesz communication team was called by the party’s critics. He became Viktor Orbán’s voice since  Orbán himself rarely spoke or gave interviews in those days. Szijjártó also often acted on behalf of the party chairman. For example, he was entrusted with answering a letter from Gordon Bajnai to Viktor Orbán, inviting him to discuss the economic program he was planning to introduce after he agreed to serve as prime minister. It was a rude, impertinent response to Bajnai’s polite letter. I suggest you take a look at that exchange because it tells a lot about Szijjártó, Orbán, and Fidesz. The picture is not pretty.

Once Fidesz won the election, Szijjártó became a personal spokesman for Viktor Orbán. Szijjártó accompanied Orbán everywhere he went. You could see him in Brussels as well as in Moscow, sitting right next to the prime minister. Obviously, he proved to be indispensable as a kind of negotiating partner because in May 2012 at the age of 33 Szijjártó was basically entrusted with Hungary’s foreign policy and trade relations. Foreign Minister János Martonyi is a figurehead; Szijjártó, by contrast, seems to spend more time on airplanes than on the ground. He is in charge of Orbán’s pet project: the opening to the East.

It is hard to tell how successful he is at convincing Far Eastern, Central Asian, and Near Eastern countries to extend trade relations with Hungary. Lots of travel, lots of boasting, a great forecast but apparently the results are meager. His age (after all, he is by now in his mid-thirties) shouldn’t be an obstacle, but unfortunately he looks a great deal younger and doesn’t give the impression of a serious and knowledgeable man. He looks like a punk and I fear he is a punk. 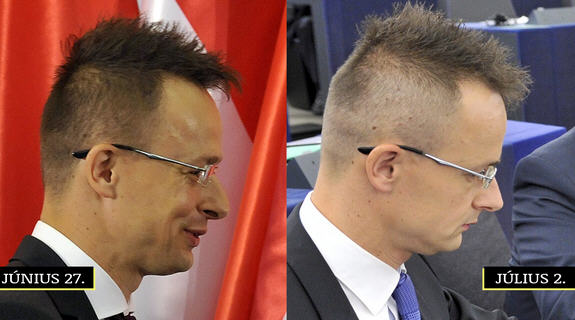 So, let’s see how Szijjártó operates on the ground. He just spent a couple of days in Israel where he gave an “exclusive” interview to The Jerusalem Post. It turns out that Szijjártó, in a meeting with Finance Minister Yair Lapid, “offered Israel access to Hungary’s 7 billion cubic meters of state-owned gas storage.” I assume he was talking about the storage the Hungarian government just bought way above market value from the German company E.on. And then came the usual boasting and exaggeration: “we could be a central European distribution hub for Israeli gas.” While at home the state-owned company just signed an agreement with Gazprom, Szijjártó in Israel complained about dependence on Russian gas which “means that we’re quite defenseless.”

While there, Szijjártó met with executives of Teva Pharmaceutical Industries Ltd., including the recently ousted CEO of the company Jeremy Levin who was awarded the Officer’s Cross of the Merit Award, one of the highest civilian awards in Hungary. Bad timing, I would say.

I am not sure why Szijjártó felt it necessary to inform the Israeli public and perhaps even the government that Hungary often goes against the policies of the European Union. For example, on the issue of nuclear energy. While the rest of Europe wants to lower or even exclude nuclear energy by 2020, Hungary is moving in an entirely different direction. Right now 43% of electricity comes from nuclear energy in Hungary, and the Orbán government wants it to be 60-70%. Thanks to Szijjártó’s “exclusive” interview, at last the Hungarian people and politicians could learn about Viktor Orbán’s plans, which he hadn’t bothered to share with anyone at home.

He also told the reporter that “while the EU pushed a platform of human rights and diversity, Hungary was forcefully embracing its Christian heritage.” I bet that made a real impression in Israel, especially when in Eastern Europe the largest Jewish community can be found in Hungary. It is not terribly difficult to come to the conclusion that if a nation forcefully defines itself as Christian, the non-Christians might not be considered part of that nation.

Before the rise of Szijjártó to his current position of roving ambassador, Orbán tried to impress China and Russia without much success. The emissary then was Tamás Fellegi, Viktor Orbán’s senior adviser in law school. At least Fellegi looked like a serious negotiator with academic credentials and business experience in the United States and in Hungary. But he failed miserably and was packed away in Washington to head a Hungarian government lobbying group. Then came the “wonder boy.”  I wonder how long he will last.