Ever since yesterday I have been mulling over the mysterious Swiss visits of Prime Minister Viktor Orbán and János Lázár, his chief of staff. As I mentioned yesterday, Demokratikus Koalíció suspects that Viktor Orbán’s recent trip to Switzerland and his stopover in Zurich between Lausanne and Budapest had something to do with banking, perhaps of a private nature. However, we know for sure, thanks to the information released by the prime minister’s office, that János Lázár’s trip to Switzerland at the end of March 2013 was undertaken in order “to have talks with a German citizen” and that the topic of the conversation was “Hungarian-German and Hungarian-Russian relations.” This led me to another angle: the large presence of Gazprom in Switzerland.

Just in Zug, a tax haven south of Zurich, three Gazprom companies have their headquarters, or to be more precise it is in Zug that they are incorporated: Gazprom Marketing & Trading AG at 19 Dammstrasse, the Nord Stream AG at 18 Industriestrasse, and the joint Russian-Ukrainian RosUkrEnergo AG at 7 Bahnhofstrasse. There are hundreds of Gazprom subsidiaries, and it is instructive to take a look at them collected in one place. I went to a few of their official websites. Gazprom Marketing & Trading AG opened for business in February 2012 “aiming to support Gazprom’s international development strategy.” They “trade natural gas, power, liquefied natural gas, liquefied petroleum gas, clean energy and carbon, and oil.” The Gazprom subsidiary Nord Stream AG is an international consortium of five major companies.

And let’s not forget about the Zurich based Gazprom Group, which has several subsidiaries, of which “the most spectacular company is Gazprom Switzerland AG.” The company is situated in the heart of Zurich’s financial district and deals in natural gas from Central Asia. Gazprom Switzerland is a wholly owned subsidiary of Gazprom Germany (Gazprom Germania), which is itself a wholly owned subsidiary of Gazprom Export, Russia. According to TagesAnzeiger of Zurich, this company has about two dozen employees yet in 2012 it generated sales of CHF 7.3 billion and a profit of 76.1 million.

Here we arrive at an intriguing piece of information. The chairman of Gazprom Switzerland is Matthias Warnig, formerly head of the Russian division of Germany’s Dresdner Bank AG, who in his earlier life in the German Democratic Republic worked for the Stasi. Back in 2005 The Wall Street Journal found documents that proved that as a major in the East German intelligence service he developed a close friendship with Vladimir Putin during the time that he worked in East Germany as a KGB agent. Apparently Warnig helped him recruit spies in the West. Warnig is not just the chairman of Gazprom Switzerland but also a director of Nord Stream with headquarters in Zug. 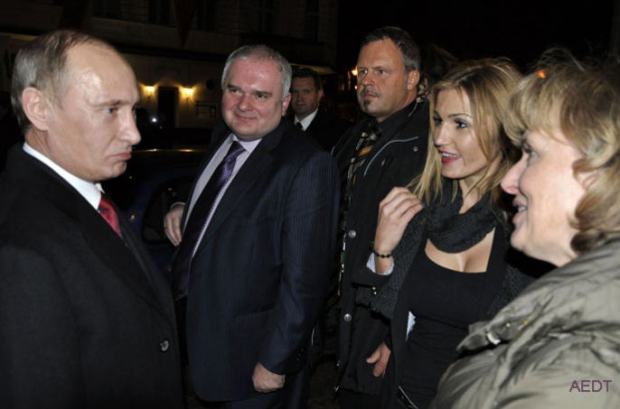 Warnig is a very powerful man indeed, but the Ukrainian crisis is having a negative effect on his network. He is a member of the board of directors of several Russian banks, including the Bank of Rossiya and VTB Bank, whose assets have been frozen by the United States. Warnig is also a board member of the energy company Rosneft and of Rusal, an aluminium producer. Both are the largest companies in their field in the world. An excellent summary of the history of Warnig’s friendship with Putin can be found in The Guardian (August 13, 2014).

Is it possible that János Lázár talked with Warnig, the “German citizen”? Warnig would have had the clout to deal not only with energy supplies but also with inter-country friendship. It’s possible that Lázár solicited Warnig’s assistance in reaching out to Putin about the future of Russian-Hungarian relations and Paks. The reference to “Hungarian-Russian relations” points in this direction.

The August 2014 trip of Orbán and Lázár in the company of their wives might have had something to do with Gazprom affairs. Someone spotted them on a flight to Zurich on Thursday, August 21. According to Orbán, they spent Thursday night with friends in Germany, but even if this was the case, there was a whole Friday during which the two men could have conducted business with Gazprom officials. Zurich, as we have learned, is the perfect place for such transactions.

Viktor Orbán’s most recent trip to Switzerland followed a different pattern. No serious business can be conducted in a train station during a quick stopover, especially not on such serious matters as Russian-Hungarian relations or energy supplies by Gazprom. Demokratikus Koalíció might be on the right track: it’s possible that Orbán was conducting a different kind of business, very possibly of a private nature.

All this is thoroughly speculative. Perhaps someone with better access to Hungarian and Russian energy providers or government “travel planners” will ferret out the truth.

It was about a month ago that I wrote a post on “Jobbik and the Russian connection: The role of Béla Kovács.” I suggest taking a look at that piece by way of background to today’s post. I ended it with the following sentence: “I assume that, given his background, the Hungarian national security office is keeping an eye on Kovács.” Well, as it turned out, only a few days before I wrote this sentence the office turned to Chief Prosecutor Peter Polt to instigate proceedings against Kovács on charges of espionage for Russia. But being an ardent supporter of Russia in the European parliament where he represented Jobbik does not necessarily mean that he was a spy. In fact, the more I read about the case the less I think that Kovács is guilty of the crime he is charged with.

As usual, Fidesz’s timing is impeccable. As we all know, the European parliamentary election will be held on May 25, and Jobbik is positioned to do extremely well at the polls. But Magyar Nemzet‘s revelation of the espionage charge may siphon off some Jobbik support.

It seems that the Fidesz top brass has known for months that the national security office was looking into Béla Kovács’s activities in Brussels. Several government actions support this hypothesis. For instance, last fall there was a belated addition to the new Criminal Code that extended the scope of espionage to include EU institutions. Prior to that, the charge of espionage could be leveled only against those who committed such a crime either against Hungary or NATO. As of January 1, if Kovács spied on the European Union he could be sentenced to a jail term of between two and eight years. One can’t help thinking that this change in the Criminal Code was not a coincidence.

More recently, on May 11, Peter Polt asked the president of the European Parliament, Martin Schulz, to revoke Kovács’s parliamentary immunity. Péter Polt should have known that the current parliamentary session had already ended and that there will be no meeting of the European Parliament between now and May 25, the day of the election. Therefore, Kovács’s case couldn’t be investigated by the European Union’s legal affairs committee and voted on by the members of the parliament before the election.

Kovács himself made no secret of his Russian sympathies. In fact, he made several speeches in the parliament scolding the European Union for not wanting to have closer relations with Russia and for not embracing Putin’s idea of a Eurasian Union. He repeatedly urged closer cooperation with Russia, which led his colleagues in Brussels to call him “the Russian lobbyist.” Such open crusading would be strange behavior from a cloak-and-dagger spy. 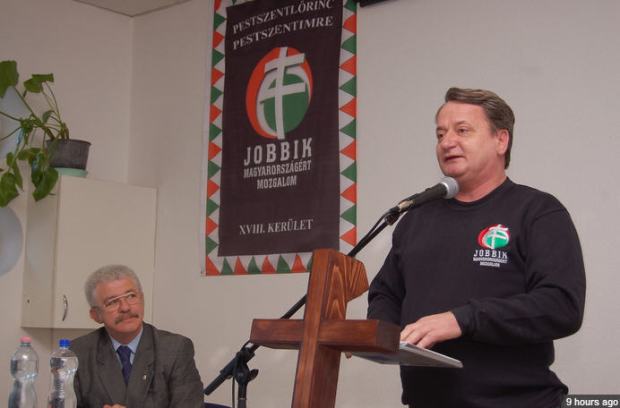 Béla Kovács, who according to Jobbik is so important that Vice President Joe Biden himself asked Viktor Orbán to prevent his work in the European Parliament
Source: jobbik18.hu

It would also be utterly foolish of a Russian spy to use Russian citizens as parliamentary aides, but this is exactly what he did when he hired two Russian youngsters to work for him. Apparently, they were  rarely seen but received a monthly salary of 1,400 euros. One of them was a nephew of his wife who is a Russian-Austrian citizen.

The Orbán government has a penchant for using the national security office for political purposes. Let us not forget the charges of espionage leveled against Lajos Galambos, former head of the national security office, and György Szilvásy, minister in charge of the secret service. We know very little about the exact charges because the proceedings were held in camera and were declared to be a state secret. But what we learned about them unofficially indicates that the charges were trumped up. A Népszabadság editorial put it this way: “We will never learn the truth about Béla Kovács. But we know all about the methods of Fidesz.” They seize every opportunity without a moment’s hesitation and use the theoretically neutral police, secret service, and prosecutor’s office. The “cases” are lined up, waiting for an order from above: we now want a picture of the hooded Zsolt Molnár or some real estate fraudster. “Oh, espionage and not for the United States but Russia? Too bad, but it will do.” Of course, Kovács still might be a spy, but “it is more and more difficult to believe the national shepherd when he cries wolf.”

Béla Kovács naturally denies the charges: “I have never been a member of any secret service, Hungarian or foreign. I never cooperated with them, nor have there been attempts to recruit me on their part.” By now, all kinds of stories are circulating, including that his Russian-born wife, Svetlana Istoshin, worked for the KGB. Something he also denies.

Fidesz naturally cast a wide net. The parliamentary committee on national security will be convened and, according to the chairman, the socialist Zsolt Molnár, they want to question Gábor Vona as well.

How much this will hurt Jobbik’s chances at the polls no one knows. Index yesterday ran an article with the title “Kágébéla might be Jobbik’s undoing.” The “Kágébéla” of course refers to his alleged ties with the KGB. Or at least this is what some of his colleagues in the party called him. In Jobbik he was mostly valued for the amount of money he managed to get for the party. Whether this money came from Russia or not, we have no idea. Without a doubt, there are many questions concerning Kovács’s past, but I am not at all sure that spying is one of his sins.