A few days ago I mentioned a possible connection between Jobbik (and other extremist parties in Europe as well) and Putin’s Russia. In that post I quoted a 2009 study from the Hungarian think tank, Political Capital. Considering the importance of the subject I would like to call attention to a new revised, up-t0-date study of Jobbik’s relationship with Russia by Political Capital. It can be read in English here. At that time I didn’t go into any details because, quite frankly, I wasn’t well versed in the matter. But this morning I discovered an English-language blog written by Anton Shekhovtsov. Yesterday he posted an article entitled “Fascist vultures of the Hungarian Jobbik and the Russian connection.” The title was intriguing and what followed were some details I hadn’t found in the Hungarian media. For example, a speech delivered by Jobbik EPM Tamás Gaudi-Nagy in a T-shirt with the following message: “Crimea legally belongs to Russia! Transcarpathia legally belongs to Hungary!” May I remind everybody that Gaudi-Nagy was the man who threw the flag of the European Union out of one of the windows of the Hungarian parliament. Here is Gaudi Nagy’s English-language speech with Hungarian subtitles.

There is widespread belief that Jobbik is being supported by Moscow, although we have no direct evidence of such financial support. One thing is sure. Jobbik has more money than the party could possibly collect from its Hungarian followers. Jobbik couldn’t have run the extensive campaign it did on the meager subsidies the government hands out to the parties. Besides Russia, Iran has also been mentioned as a possible source of revenue.

In any case, Shekhovtsov suggests that Gábor Vona, the party’s chairman, was invited to Russia by Aleksandr Dugin, a professor at Moscow State University “who is known for his proximity to fascism.” He seems to be a political eclectic. He is, for instance, one of the most popular advocates of the creation of a Eurasian empire. And he helped write the program for the Communist Party of the Russian Federation.

Vona had an opportunity while in the Russian capital to deliver a lecture entitled “Russia and Europe.” In this speech Vona called the European Union a “treacherous organization” and declared that it would be better for Hungary to join the Russia-dominated Eurasian Union should the occasion arise. 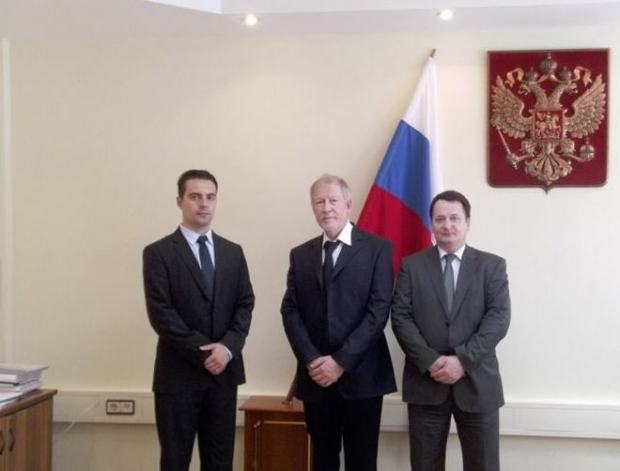 Gábor Vona, Ivan Grachov, and Béla Kovács in Moscow in May 2013 / Photo: Facebook

The plot only thickens with the entrance of Béla Kovács, a man about whom we know very little but enough for some people to suspect that he is a Russian agent.  He was born in Budapest, but after finishing high school he moved with his parents to Japan, sometime in the late 1970s. His father was apparently employed by the Hungarian Embassy in Tokyo. It is possible that he also spent four years at “one of the private universities” in the United States, but he graduated from the Institute of International Relations, known for its close ties to the KGB. In addition to Hungarian, Kovács speaks Russian, English, French, German, Japanese, and Polish.

He returned to Hungary in 1986 but in 1988 went back to Moscow where he apparently worked for several Russian companies involved in international trade. We don’t know why, but in 2003 he again returned to Hungary, where he established a small salad bar which failed. In 2005 he discovered Jobbik, whose “bright enthusiastic young men” changed his life. Soon enough he became a very important man in the party. He handles the party’s finances, and in 2010 he was chosen to represent Jobbik in Brussels. There he is considered to be a Russian lobbyist.

Kovács is a man of the world and seems to have  connections with leading members of far right parties all over Europe and the United Kingdom. As his Jobbik colleagues said, without him they wouldn’t have been able to find their bearings in Brussels so easily. It was his idea to create the Alliance of European National Movements, which includes all important far-right parties.

He was one of the representatives of extremist parties whom Russia invited “to monitor” the Crimean referendum last month. Most of the overseers came from right radical circles, although there were a few from the far left parties of Finland, Germany, and Greece.

I discovered an article about Kovács on the website of the new neo-Nazi party, Magyar Hajnal (Hungarian Dawn). It claims that in 2010 he was penniless but a couple of years later he managed to live lavishly, a fact that was confirmed by other sources. According to József Gulyás, a former member of the parliamentary committee on national security, Kovács’s background and activities are “entirely impenetrable.”  Mind you, Gulyás is convinced that Jobbik “is a phony nationalist party which serves only Russian interests.”

I assume that, given his background, the Hungarian national security office is keeping an eye on Kovács. Given their poor performance in the past, however, I have the feeling they know no more about Kovács than anyone can discover by diligently searching the Internet for clues.