During the month of May people seem to be preoccupied with news about the Hungarian matriculation exams. All of the questions are thoroughly discussed in the media. Everybody has an opinion about the quality of the questions, their difficulty, and their political implications if any.

I find this national preoccupation odd. After all, how high school graduates perform on these examinations should really be the concern of the students and their parents. Moreover, matriculation means a great deal less than it did, let’s say, a hundred or even fifty years ago. Before World War II matriculation was the dividing line between the middle class and the rest of society. After the war the number of high school graduates grew significantly, and thus a matriculation certificate means a great deal less today than it did in the olden days.

Judging from past experience, this matriculation mania will last for weeks, but the first few days are the truly exciting ones as far as the Hungarian public is concerned because Hungarian language and literature and history are the first two subjects to be tested. 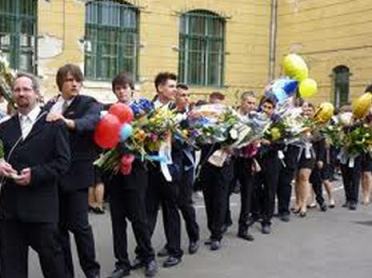 This morning students spent four hours writing answers to the questions on the Hungarian test, which had two parts. The first was a reading and comprehension test of a text on linguistics. The second required the students to write an essay on one of three possible topics.

As usual, this year’s Hungarian test has its critics. One possible topic was a short story by Sándor Márai (1900-1989); apparently, that was the most popular choice. The second was an essay by Leszek Kołakowski, the Polish philosopher, who is, as I found out, not well known in Hungary. Most likely the students had no idea who the man was. But it was the third that  raised the most eyebrows. Students were supposed to compare two epigrams: one by Dániel Berzsenyi (1776-1836) and the other by Mihály Vörösmarty (1800-1855). Both are about Napoleon Bonaparte.

The soul of the age was Liberty whose flags your victorious armies carried. People worshiped you and the fate of mankind was in your hands. However, you surrendered it to your pleasure, and a crown of thorns replaced your laurels. The hand that raised you now throws you into the dust.

Then the Vörösmarty poem:

He was great and because of his greatness he had to fall; Heaven and earth endeavored to make him descend: Man made of dust is jealous of the greater one and even gods could not tolerate his kind.

The president of the Association of Hungarian Teachers, I think rightly, claims that there is no way anyone can write a fairly long essay comparing these two epigrams. He also added that “the task borders on the embarrassing.” He is not alone in believing that the choice of Napoleon was not a coincidence.

Actually, I find this theory a bit of a stretch, but I agree that the Kołakowski essay “On travel”  was selected as part of an effort to dissuade Hungarian students from leaving the country and studying in some other European Union country. In the essay Kołakowski claims that people don’t travel in order to learn “because everything we can learn during a trip can be learned perhaps even better without travel.” The reason for travel is to escape  from everyday problems in addition to satisfying one’s curiosity.

It is unlikely that such a primitive little trick would deter some of those who are serious about leaving Hungary to study elsewhere. Here is a series of cartoons that appeared in Index, drawn by “grafitember.” A girl who is just graduating from high school stops at the corner store to buy a chocolate bar. She and the store owner are old acquaintances.

-Oh, my dear Panni, you see this day arrived after all. Are you worried or did you study hard?

-I am not so great in Hungarian but I’m prepared.

-Where are you going from here?

-To Vienna, just as half of my class. Perhaps archaeology or management.

Indeed, it seems that the best and the brightest are planning to study abroad. Despite this exodus, Viktor Orbán today talked about how he is going to make Hungary the “land of knowledge.” Yes, from less and less money and fewer and fewer university graduates.