Yesterday a very pessimistic article appeared in Élet és Irodalom by András Bruck, who back in November had written an equally pessimistic piece entitled “No, Viktor Will Not Leave.” You may recall that Gáspár Miklós Tamás gently asked Viktor Orbán at the October 23rd demonstration to leave before it is too late.

This time Bruck is mourning the death of the protest movements. In “Hungary Is Quiet Again” he lists the aborted attempts of the students as well as the opposition politicians to come together and form a common platform. The students were effectively divided by the government while the opposition politicians simply cannot come to an understanding. All is lost, claims Bruck. 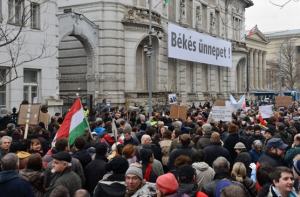 Indeed, the prospects are grim, but all is not lost. It is true that the “official” student representatives caved and sided with the government instead of fighting for the free movement of Hungarian students. They missed a real opportunity: the ruling powers feared the student masses when HÖOK and HaHa managed to demonstrate jointly on the streets. For the leaders of HÖOK, however, their positions in the hierarchy and the very substantial money these student associations receive from the government were more important than serving as the representatives of their fellow students. And yet there still remains a glimmer of hope. The last time around there were only about 70 students at Fidesz headquarters, today there were as many as 1,000, although serious pressure was brought against the student leaders. Heavy fines for high school students and harassment of the university students. Yet they didn’t give up. That is a good sign.

I must say that the behavior of the opposition politicians is less understandable than that of the opportunistic student leaders of HÖOK. After all, the student leaders are part of the power structure; they receive substantial benefits from the government. But the opposition leaders? Even those who have seats in parliament have nothing to lose. If they remain fragmented it can easily happen that not a single one of them will be able to continue in politics. Hungary will become a one-party system after a democratic election due to the electoral system introduced by the Orbán government.

The opposition, both the students and the politicians, should be heartened by the fact that the government party remains paranoid. Otherwise, it is difficult to imagine that such an important event as Fidesz’s twenty-fifth birthday would have been celebrated yesterday under the cloak of secrecy. Not even the reporter of the servile MTI was allowed inside party headquarters. Moreover, the party’s real birthday is March 30, 1988; it should have been celebrated today. The deterrent was most likely the announcement of the demonstration for today.

In the past the birthday party was a much publicized event that included spouses (mostly wives) and children. There were many photo opportunities. It seemed that not a year went by without a picture of Viktor Orbán chatting amiably with the anti-Semitic Zsolt Bayer. Now silence. Only a short press release. Péter Földes (fsp) suggested on his blog that the founders of Fidesz were either afraid or ashamed of their present selves. Several comments stressed that these guys don’t even know the meaning of the word “shame.”

Journalists were having a heyday collecting earlier quotations from Fidesz politicians, starting with András Bozóki who joined Fidesz two months after its establishment. In October 1988 he stressed that Fidesz is “not a political party but a youth organization that it is not interested in political power but wants to widen the forces of democracy among students.” The series of quotations ends with Tamás Deutsch’s claim (February 18, 2013) that “Fidesz came into being as a political organization in the western mold and it is still the same today.”

Meanwhile the present government keeps putting pressure on its youthful political opponents. In the dead of night the police raided and changed locks on a favorite cultural center for young people maintained by a Jewish youth organization because it was alleged that the occupation of Fidesz headquarters was organized there. The Hungarian police, not known for their smarts, forgot that there were other entrances. The next day students barricaded themselves inside. Then came the heavy-handed response from the City of Budapest, announcing that the organization had lost its right to the place. The servile MAZSIHISZ, which represents the Hungarian Jewry, didn’t defend the youth organization. It simply begged the city not to close the center until after Passover. The city generously obliged.

Meanwhile three students of HaHa were arrested without a warrant. Együtt 2014 called the methods employed by the police “reminiscent of the darkest days of the Kádár regime.” The name of János Kádár came up in another article. According to its author, even János Kádár was braver after the crushed revolution than Viktor Orbán is now. After all, Kádár had the guts to get half a million people on the streets on May 1, 1957 while Orbán and the co-founders of Fidesz hid from a small group of peaceful demonstrators. Kádár’s name was mentioned even in front of Fidesz headquarters. One of the speakers recalled Kádár’s political demise as an example for Orbán, indicating that his mismanagement of the country’s affairs might end in his being dropped by his own party.

Yes, all is not lost but it will be a difficult fight to get rid of the present rulers of Hungary. As long as the opposition parties don’t unite, opponents of the regime don’t believe that it is worth even going to the polls. There was hope after October 23, 2012, after Gordon Bajnai’s call for action. But since then not much has happened and the electorate has become discouraged. Without a united front of all forces there is no way to get rid of this government.