Today I would like to say a few words about the reorganization of the government. First, one wonders why it took so long to create the third Orbán government considering that on the top level there were very few personnel changes. Only two ministries were affected–the ministry of foreign trade and foreign affairs and the ministry of administration and justice. Not much changed in the latter, but what happened in the former is truly astonishing. With the arrival of Tibor Navracsics and Péter Szijjártó about 200 new faces appeared in the ministry; their corresponding numbers were either dismissed or moved to other positions in other ministries. It is just now becoming evident how dissatisfied Viktor Orbán must have been with János Martonyi and the men and women around him.

In 2010 Viktor Orbán announced that there were two ministers whose presence in his second government was assured: Sándor Pintér and János Martonyi. Martonyi hadn’t been officially nominated at the time, but Orbán sent him nonetheless to Bratislava to negotiate with the Slovaks.

Martonyi has been loyal to Viktor Orbán ever since 1998 when he was first named foreign minister. From the WikiLeaks documents we know that after the lost election of 2002 Martonyi was a frequent and welcome visitor in the U.S. Embassy in Budapest where he was especially highly regarded by Ambassador April H. Foley (2006-2009). As a result, the relationship between Ferenc Gyurcsány and the American ambassador was outright antagonistic.

János Martonyi made an almost clean sweep in the personnel of the ministry in 2010 and yet, it seems, the atmosphere and the foreign policy strategies devised by Martonyi were not to Orbán’s liking. More and more areas of foreign policy were taken away from the ministry and given to others: first to Tamás Fellegi, minister of national development, and later to Péter Szijjártó. The former was supposed to woo China and Russia while Szijjártó concentrated on the Middle East. And yet Martonyi defended the prime minister and remained loyal to the end. If he was insulted by being sidestepped and ignored, he didn’t show it.

Now his tenure is over. For six months Tibor Navracsics will fill Martonyi’s place after which Orbán’s real favorite, Péter Szijjártó, will become minister. He will most likely continue the policy of the “Eastern Opening,” the brainchild of Viktor Orbán. For such a drastic change in orientation an entirely new staff was necessary. Not one of the six undersecretaries remained, and out of the ten assistant undersecretaries only one kept his job.

Among the victims was Enikő Győri, undersecretary in charge of Hungary’s relations with the European Union, who will be leaving to serve as ambassador to Spain. Her departure might be connected to a debate about which ministry should deal with the EU.  János Lázár wants to move the responsibility to the prime minister’s office, while Navracsics insisted that relations with Brussels belongs to the ministry of foreign affairs. After Navracsics’s departure Lázár may well have his way. 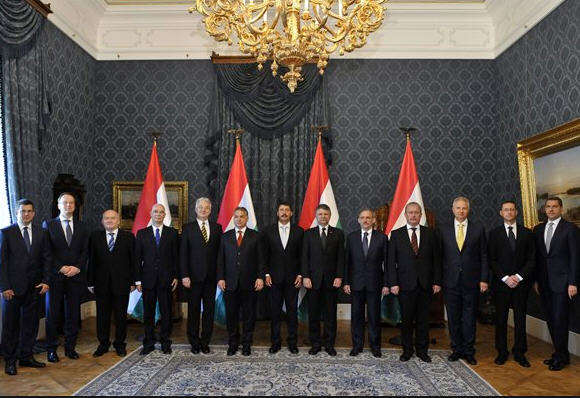 Gergely Prőhle, the assistant undersecretary about whom I wrote several times, is also leaving. Zoltán Balog created a new position for him in the ministry of human resources. With this change Prőhle’s diplomatic career seems to be coming to an end. Earlier he served as ambassador to Bern and Berlin.

The most noteworthy change is the departure of Zsolt Németh, undersecretary of foreign affairs in both the first and the second Orbán governments. He was one of the founders of Fidesz who has held high positions in the party ever since 1989. In fact, between 1995 and 2003 he was one of the vice-presidents of the party. He has been a member of parliament since 1990. He will now be the chairman of the parliament’s committee on foreign affairs. According to Népszabadság, Németh was offered the post of ambassador to Washington but he preferred to retire completely from the conduct of foreign affairs. He supports a foreign policy based on transatlantic ties and “would like to see better relations between Hungary and the United States.” Apparently, he is not happy with the cozy relations between Hungary and Putin’s Russia.

I see no attempt on the part of the government to be frugal. Not only is the government growing steadily but grandiose plans are being hatched practically daily. The government is planning to build a new museum quarter, to move ministries from Budapest to various cities across the country, and to move the office of the prime minister to the Castle district, near the current residence of the president.

The Hungarian government is also continuing its mania for acquisitions. It is currently negotiating “to buy Bombardier’s stake in Hungarian rail transportation firm Bombardier MAV Kft.” The new minister of national development told Napi Gazdaság that “it’s a clear aim of the government and the ministry to carry out further acquisitions. It’s not a secret that there are talks under way in this respect with E.ON, for example.”

After this spending spree, who is going to replenish the Hungarian piggy bank?