If Viktor Orbán were as talented at governing as he is at political maneuvering he would be an excellent prime minister. But his brain power is spent on devising devious traps for his opponents whose imagination can’t possibly measure up to his, with his bag full of tricks. Dirty tricks, dishonest tricks, shameful tricks. Fortunately there are not too many people on this earth who can surpass his moral turpitude. He is a man who thinks that in politics anything goes. I don’t blame the political opposition for being duped by him once again.

So, what happened? The head of the press department of the Prime Minister’s Office said that Viktor Orbán would deliver a speech before the day’s parliamentary agenda. The announced title of the speech was “Magyarország nem hagyja magát!” (Hungary doesn’t give in!). Considering that the vote on the amendments to the constitution was scheduled for today, everybody assumed that the prime minister would talk about his government’s decision to go ahead with the scheduled vote despite requests from Brussels and Strasbourg to postpone it. The title of the speech certainly suggested as much.

MSZP had already decided to boycott today’s session. Their empty seats were decorated with huge exclamation points. Only their leading spokesman for the day, József Tóbiás, was in the chamber ready to deliver his answer to Orbán’s speech. Then came the surprise. The speech was not about the constitution and about the request of the Council of Europe and the European Commission to postpone the vote. It was about a recent court decision that allowed utility companies to pass on to their customers the added expenses that they have to endure because of extra taxes mandated by the government.

He was most indignant. He said that he can “hardly find words fit for polite society” to describe what he thinks of the Hungarian judiciary. The decision rendered is “scandalous.” And he went on and on about the poor Hungarian people who pay too much for utilities and about those foreign companies that earned very handsome profits in the past. He asked all Hungarians “to raise their voices so these companies would realize that they are facing not only the government but the whole nation.” Among other adjectives, he used “impudent” (arcátlan, a favorite word of Fidesz politicians) in connection with the courts. Ferenc Gyurcsány rightly considered Orbán’s attack on the courts “a very serious and unacceptable violation of judicial independence.” For good measure he added that “it is not the courts that are impudent but Viktor Orbán, who doesn’t seem to understand the very basis of democracy.”

József Tóbiás, after a few sentences in which he complained that the prime minister had nothing to say about the most important issue at hand–the amendments to the constitution, surrendered his right to speak and left the chamber.

The Hungarian prime minister could thus demonstrate to the electorate that he is their advocate, battling with the utility companies and the courts that are supporting these awful capitalists, while the MSZP delegates didn’t even bother to show up. What kind of mind can come up with such a scenario? Moreover, even if he achieved his immediate goal he also demonstrated that the fears of the European Union and the Council of Europe are not without foundation. Today the Hungarian prime minister again proved that the country he transformed over the last three years is no longer a democracy. A woman member of parliament cried out during the speech: “Dictator!” while four members of DK held up a banner that read: “Önkényuralom,” a synomym of “Dictatorship!” I think it was a high price to pay for a fleeting moment of victory. 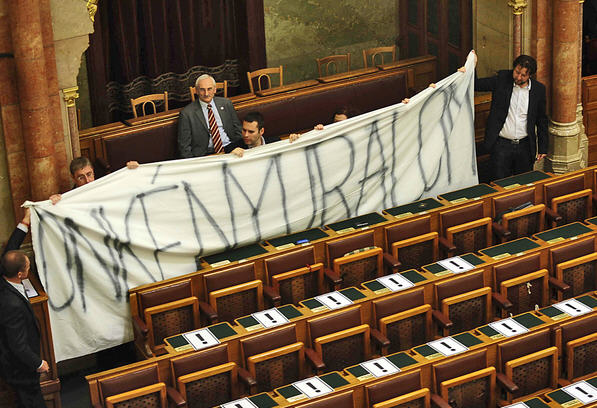 Shortly after 5:00 p.m. the amendments were passed. There were only 309 members of parliament present. 265 voted for the amendments, 11 against, and 33 abstained. Most of the Jobbik MPs abstained, but Mrs. Loránt Hegedűs, Péter Schön, and Tamás Sneider said no. The Schiffer wing of the former LMP was there and voted against the bill. So did Katalin Szili, formerly MSZP but now an independent. The Jávor wing of LMP refused to participate in the charade and so did members of DK in addition to the MSZP delegation.

The opposition’s last hope is President János Áder, who is in Berlin at the moment. According to former president and chief justice of the Constitutional Court László Sólyom, in his legal interpretation the president is empowered to veto the bill. Sólyom wrote an article on the subject that appeared in Népszabadság. What an irony, this man who was Fidesz’s choice to become president and who never hid his disdain for the socialists and his support of Fidesz today is able to publish an article only in Népszabadság. I might add that there are a couple of very critical opinion pieces in right-of-center publications like Heti Válasz and Mandiner. Tomorrow I’ll concentrate on Sólyom’s arguments and the writings of these right-wing critics.

Meanwhile, more and more people are expressing their concern about the amended constitution. They point out that the changes are so fundamental and extensive that the original document is unrecognizable. Journalists are calling this new document “Constitution 2.0.” José Manuel Barroso again expressed his worries and so did Herman Van Rompuy, Thorbjørn Jagland, Hannes Swoboda, Martin Schulz (president of the European Parliament), and many others.

There has been only one official Hungarian response to all this. Hungarian Foreign Minister János Martonyi announced that “Hungary is open to dialogue with anyone on the subject and Hungary will ask the opinion of the Venice Commission on this newly amended document.”

And finally, here is the letter Barroso wrote to Orbán on Friday. It didn’t do any good.