The NATO summit in Newport, Wales is over and, according to Prime Minister Viktor Orbán, “from the Hungarian point of view it was a great success.” So, let’s see what the Hungarian prime minister considers to be a great success in view of his and other leading Fidesz politicians’ earlier pronouncements on the Russian-Ukrainian conflict.

NATO approved wide-ranging plans to strengthen its defenses on its eastern flanks in order to reassure Poland and the Baltic states that they have the full backing of NATO in case of Russian aggression. The plan includes the creation of a rapid action force temporarily stationed in Estonia but eventually to be moved to Poland. This rapid action force will include several thousand ground troops ready to be deployed. It will be supported by air, sea, and special forces. This is not as much as Poland initially wanted, which was a permanent NATO base in the region, but even Polish Prime Minister Donald Tusk was satisfied with the current plan. According to details released and reported by Reuters, the first units of the force are expected to total around 5,000 troops that will be ready to move in two days.

Viktor Orbán spoke to Hungarian reporters after the summit ended. He announced that, just like other NATO members, Hungary will increase its military spending. As I noted yesterday, at the moment Hungary spends only 0.88% of its GDP on its armed forces; the country agreed to the compulsory minimum of 2.0%. If Hungary today decided to spend that much on the military it would mean an additional 360 billion forints, which at the moment it does not have. Orbán also announced that Hungary’s security can be guaranteed “only within the framework of  NATO” and that he therefore views “the decision of the Hungarian people when in a referendum they voted for membership in NATO” as wise. He said that Hungary would purchase modern weaponry and prepare the Pápa air base to receive large strategic carriers. He also said that “NATO troops will appear in the region of Central Europe,” which may mean that they will also be stationed in Hungary. By the end of the year each country will develop its own plans in case “there is a direct military threat” to these countries. The threat Orbán is talking about is obviously Russia. 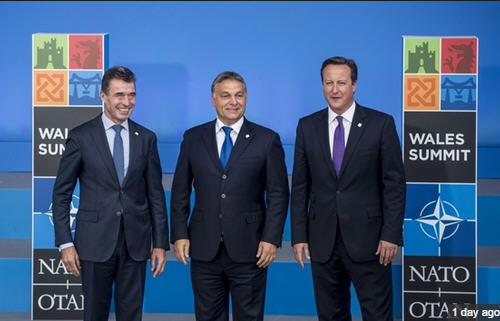 Realizing the discrepancy between his current enthusiasm for greater military security for Hungary and his earlier statements on the Russian-Ukrainian conflict, he tried to convince his audience that earlier he was only against sanctions, which is “an entirely different question” and independent of the decisions reached at the summit. However, Orbán not only spoke up against the sanctions but stated that as far as he is concerned the conflict for Hungary is an “economic” issue only. He made it clear at that time that he understands the anxiety of Poland and the Baltic states but Hungary’s situation is different. In plain language, as far as he is concerned Hungary’s old and faithful friend Poland can go down the drain, he doesn’t really care. It looks as if the Poles interpreted his words similarly. Zsolt Németh, former undersecretary of the ministry under János Martonyi and now chairman of the parliamentary committee on foreign affairs, talked about “a serious challenge to bilateral relations” between Poland and Hungary in Krynica in an economic forum. The Ukrainian issue should not be allowed to divide the two countries, he emphasized.

While today Viktor Orbán sang the praises of NATO, only a couple of days ago Tibor Navracsics, foreign minister at the moment, expressed doubts about the western commitment to Hungary. In an interview with Boris Kalnoky of Die Welt, he specifically talked about the West letting Hungary down in 1945 and 1956. Moreover, when asked whether Hungary would like to have NATO troops on its soil, he answered that Hungary, unlike the Baltic states, is not threatened by anyone. And recall László Kövér’s outlandish attack only two days ago on Ukraine and on the western powers who use her as a pawn to separate Russia from Europe. One cannot dismiss Kövér’s remarks as unimportant. After all, Kövér is the closest associate and friend of Viktor Orbán and the president of the Hungarian parliament. Apparently, he is the only person in Fidesz who can give Orbán a piece of his mind and who can actually influence him. So, it is hard to know what Viktor Orbán really thinks about NATO and Hungary’s relation to it.

The pressure is intense on Orbán as a result of the Russian aggression and the western reaction to it. Although the Russian “separatists” have ostensibly agreed to a ceasefire, there is no question that in the last few weeks a full-fledged war was waged in the southeastern districts of Ukraine. And everybody knows that that war was unleashed by Vladimir Putin. NATO’s and the EU’s reaction to Russian aggression was rapid and resolute. As a result, it looks as if Viktor Orbán’s “eastern opening” and his flirtation with Putin’s Russia is over. Orbán will have to shelve his grandiose plans to have Hungary play the role of mediator between East and West. In the future it will be impossible to play that game if he wants Hungary to stay in the European Union, which he clearly needs for financial reasons. Now the question is whether the European Union will allow him to build his “illiberal state” on its “liberal” money.