Once Viktor Orbán is on a roll there is no way of stopping him. It matters not what politicians of the countries in the European Union think of his belligerent remarks concerning the Hungarian minority in the Subcarpathian region of Ukraine, he will never admit that it may have been unfortunate to take Russia’s side in the Russo-Ukrainian conflict. Because this is exactly what Viktor Orbán did. The Russian newspapers uniformly welcomed the Hungarian prime minister’s remarks on minority rights, which in Ukraine’s case might mean the loss of sizable Ukrainian territories to Putin’s Russia. In his speech last Saturday Orbán talked about Hungarians as a chivalrous nation. I must say that he has odd ideas about the meaning of chivalry. Let’s kick somebody when he is down. A real gentleman.

Although Foreign Minister János Martonyi tried to salvage the situation after the outburst of indignation from Ukraine and disapproval from Poland, Orbán is not the kind of man who is ready to admit a mistake or misstep. Today at the meeting of the prime ministers of the Visegrád 4 (Czech Republic, Slovakia, Poland, and Hungary) held in Bratislava, Orbán not only repeated his earlier demands but added more fuel to the fire. He accused the western countries of hypocrisy when it comes to Ukraine because it is not only Russia that poses problems for the EU but Ukraine as well. Orbán expressed his doubts that democracy will ever take hold in Ukraine.

As far as his demands toward Ukraine are concerned, he told his audience point blank that since EU financial assistance is necessary, to which Hungary also contributes, he expects that Ukraine will do whatever is necessary to rectify the situation of Hungarians in Ukraine. Interestingly enough, in Hungary’s case that kind of argument doesn’t cut it for him. He takes the EU’s money and does whatever he wants. Brussels should not demand anything from Hungary.

Hungarians have cultural autonomy in Ukraine, as they do in Romania, Slovakia, and Serbia. After listening to Orbán, one might think that the Hungarian minority’s lot in the neighboring countries is intolerable. This is not the case. In fact, in the last twenty years or so their status has greatly improved. There are always some complaints but, on the whole, a state of peaceful coexistence seems to exist between the majority and the minorities. Orbán is simply using the crisis to his own advantage.

Of the four prime ministers who met in Bratislava, Donald Tusk is the one who most resolutely opposes Russia and supports Ukraine. Hungarians might complain about Russia’s military help to Vienna during the War of Independence in 1849 and, of course, Hungary was in the Soviet sphere of influence for forty years, but no one can discount Polish grievances when it comes to Russian imperialism. Polish concerns are both deeply felt and understandable.

I myself sympathize with the Polish position and fear that Viktor Orbán and Slovak Prime Minister Robert Fico, who seemed to support Orbán wholeheartedly, are short-sighted. Moreover, if I were Fico, I would be worried about Orbán’s intentions. When is he going to demand autonomy for the Hungarian minority in Slovakia? When he is going to attack the Slovak law that forbids dual citizenship for its citizens?

As usual, Orbán got international coverage for his latest bombastic idea, the formation of a regional army. He is demanding “military guarantees for Central Europe. He talked about a Central European military unit (harccsoport) that could be set up by 2016. He also mentioned a longstanding idea of his, the creation of a north-south infrastructure that would facilitate the movement of goods in the Central European countries. And he pitched the idea of nuclear energy, which in his opinion is the key to European competitiveness.

I’m certain that Orbán’s followers will welcome their leader’s resolute defense of the Hungarian minority. But critics think that Orbán’s belligerence actually makes the lives of the Hungarian minorities more difficult. Here is one example from Romania. The Romanian government steadfastly stands by Ukraine and condemns Russian provocations. And lately, especially since the outbreak of the Ukrainian crisis, they worry about the Hungarian government’s demand for autonomy. They look at Ukraine and fear for the integrity of their own country.

Yesterday Bálint Magyar and Attila Ara-Kovács, in a piece that appeared in Népszabadság, called attention to an article that was published in Adevarul, the largest Romanian newspaper. It dealt with the fear that because of the Hungarian demand for autonomy Romania might succumb to the fate of Ukraine. Of course, one could say that these fears are baseless, but Orbán’s ruthless exploitation of the Ukrainian crisis intensified Romanian paranoia. And if the Romanian government worries about its own security, it may decide to withdraw some of the privileges granted to the Hungarian minority in Romania.

I have the feeling that this particular incident will not blow over anytime soon. After all, the Russian-Ukrainian conflict will be with us for a while. If a country by inciting ethnic conflict wants to redraw borders, its actions can easily give rise to a full-fledged war and perhaps the demise of a state. Just think of  the former Yugoslavia.

The last time I talked about the Hungarian government’s attitude toward the the Ukrainian crisis was at the beginning of March when, most likely as a result of Polish urging, Hungarian foreign minister János Martonyi joined his Visegrád 4 colleagues and condemned Russian action in the Crimea. Soon enough, Zsolt Németh, undersecretary in the ministry, called in the Russian ambassador to express Hungary’s disapproval of Russian aggression. By that point I thought that Hungary would remain resolute in defense of Ukraine. But something happened between March 4 and 18, when Hungary retreated from its earlier position.

The Council of the European Union released a statement in which it stated that “the EU does not recognize the illegal ‘referendum’ and its outcome.” The EU and the U.S. agreed to impose sanctions against Russian and Ukrainian officials considered responsible for the referendum. Sanctioning would proceed in three stages, with the final stage including economic sanctions.

In an interview with CNN on March 18 János Martonyi indicated that Hungary would be a very reluctant participant in any action against Putin’s Russia. If an economic conflict were to develop between the EU and Russia, “one of the EU national economies hit most would be Hungary due to its vulnerability to energy supplies.” A few days later Viktor Orbán claimed that they checked all the numbers and indeed Hungary would be a huge loser if economic sanctions were leveled against Russia.

In fact, it seems that Hungary is one of the three most reluctant EU members when it comes to taking a stance against Russian aggression. The other two countries are Greece and Cyprus. Both Greece and Hungary depend on Russia for about 50% of their energy needs while Cyprus, though it doesn’t need Russian gas, does want its oligarchs’ money. As Judy Dempsey, the well-known journalist, remarked, “Cyprus’s reluctance is linked to its status as a lucrative parking place for Russian money.” In the same article she stated that “East Europeans aren’t united either. Hungarian Prime Minister Viktor Orbán, who recently signed a major nuclear energy contract with Russia, has played down the entire Ukraine crisis and Russia’s annexation of Crimea. In contrast, the Baltic states are so afraid of their giant neighbor’s appetite that they are taking a tough line despite a total dependence on Russian gas.” (For a complete list of the EU member states and their respective attitudes toward Russian sanctions, take a look at the chart in Judy Dempsey’s article.)

Well, there is playing down and playing down. At the outbreak of the crisis Viktor Orbán announced that “Hungary is not part of the conflict.” Just before the March 6 summit Orbán released a statement in which he made no reference to Russia at all. He announced that the topic in Brussels will naturally be Ukraine but added that “for us the most important consideration is the security of Hungarians in Subcarpathia.” It is “from this viewpoint that we look at the events. By sending the foreign minister to Subcarpathia we wanted to make sure that the Hungarians there know that they can count on us.”

Last Thursday Orbán had a chance to talk with Angela Merkel before the start of the summit. The meeting, in the presence of Péter Szijjártó, lasted half an hour during which, I’m certain, Orbán wanted to convince Merkel to refrain from additional sanctions. Originally 21 Russian and Ukrainian individuals were barred from entering the EU and their bank accounts were frozen. It seems that Orbán wasn’t persuasive enough because Merkel, who was keen on adding 11 more persons to the list, managed to convince her colleagues to embark on the second stage of sanctions against Russia. After the meetings Orbán announced to Hungarian journalists that the issue of Paks didn’t come up. In his usual cocky manner he announced that “there is nothing to discuss in this connection. It is a closed issue.”

In the end Orbán, representing Hungary, signed the agreement that cites Ukraine’s desire to become part of the European Union sometime in the future. The Hungarian prime minister made it clear, however, that minority rights in Ukraine are his primary concern. If the language law that would have curtailed the free use of Hungarian in Subcarpathia had been enacted, he wouldn’t have signed the document. He added that the Ukrainians must conduct a meticulous nationality policy and that at the same time the Ukrainian government must restrain the nationalistic far-right elements within the country.

He then turned to his ideas about the most desirable source of energy, which in his opinion is nuclear power. In this respect, he is following the lead of Great Britain. And that takes me to a newly published article on CNBC’s website by Javier E. David. The author argues that “the new Cold War brewing between Russia and the U.S. has the potential to go nuclear–just not in the conventional sense.” As a result of the Ukrainian crisis, a debate developed as to whether the United States can use natural gas to counter Russia’s global ambitions. But “some experts say the real front in the global energy battle lies not in oil and gas, but in the arena of nuclear technology.” According to the World Nuclear Association, Rosatom is building 37 percent of the new atomic facilities currently under construction worldwide. 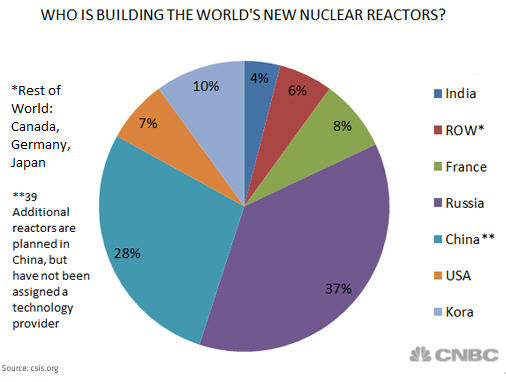 The article cites Barbara Judge, former chairperson of the U.K. Atomic Energy Authority, who describes the situation as follows: “The Russians view nuclear as an excellent export product. . . . They are using it as part of their plan to establish themselves as a geopolitical power.”  How do they achieve this? By lending poorer countries money. “Countries that need nuclear often do not have the funds to pay for it.” By financially helping these countries purchase nuclear technology, Russia “is using that money as a lever to open the door.”

It is because of these considerations that Viktor Orbán might be mistaken and that, after all, the case of Paks might not be closed.