A startling piece of news appeared yesterday in Népszabadság. A young man of dual Hungarian-Syrian citizenship with close ties to Fidesz might have been involved in one way or another in the murders of several Roma families which occurred between July 21, 2008 and August 3, 2009. After three years of police investigation and 186 days in court, the case was closed on August 6, 2013, when three men received life imprisonment without parole and a fourth thirteen years without the possibility of early release. No one else was ever charged.

It would take far too long to catalog all the mistakes the police and the medical authorities made during the investigation that resulted in less than complete discovery. It is very possible that in addition to the four sentenced in August others might have been involved. We don’t even know all the pertinent information about the men who were convicted. For instance, one of the culprits had apparently worked for the Katonai Biztonsági Hivatal (Office of Military Security), but the details of his employment were never completely unearthed.

The authorities never managed to discover the source of all the weapons used in these murders. Some were stolen from the collection of a hunter by three of the accused. It was known that there was another person involved in the theft, but the police investigation failed to identify him. In addition to the stolen weapons there were other guns in the three men’s possession whose origin remained a mystery. The investigators knew that the Kiss brothers, István and Árpád, tried to purchase guns in Budapest. It was in connection with this part of the investigation that the name of Omar Ádám Sayfo surfaced.

A document recently found its way to the newsroom of Népszabadság which indicates that Sayfo was, even if not a potential suspect himself, a source of information about one of the men, István Kiss. In his testimony Sayfo told investigators that he had known Kiss for at least ten years and that they had been good friends. Sayfo knew about Kiss’s extremist political views, yet he found him surprisingly open-minded, a man who regretted the swastikas tattooed on his hand and leg. Nonetheless, Kiss was a member of an organization called Véres kard (Bloody Sword), which is a Hungarist organization, i.e. its members are followers of Ferenc Szálasi.

During Sayfo’s interrogation the investigators inquired about his views on firearms. He answered that, like all men, he is interested in them. At the time of his questioning he was thinking about signing up for a course for future hunters. Later Sayfo also testified in court and, when asked whether István Kiss had ever talked to him about acquiring weapons, he answered in the negative.

A parliamentary subcommittee comprised of three politicians, Károly Tóth (MSZP), József Gulyás (SZDSZ, today Együtt14-MP), and Ervin Demeter (Fidesz, former minister in charge of national security in the first Orbán government), had access to the testimony of “O.S.,” but they allegedly paid no attention to the man. Népszava asked Ervin Demeter about Omar Sayfo, since Demeter was a contributor to Magyar Demokrata when Sayfo was one of the paper’s editors. Demeter claims not to have known him. Magyar Demokrata, by the way, is full of anti-Semitic articles, many of them written by Omar Sayfo. The paper’s editor-in-chief is András Bencsik, one of the organizers of the Peace Marches.

Sayfo wore many hats in those days. In addition to being an editor of Magyar Demokrata, he was a Ph.D. candidate at the Péter Pázmány Catholic University, specializing in Arabic literature, culture, and politics. He was also active in Fidelitas, the youth organization of Fidesz. And he often showed up as a “political scientist” on Hír TV. Lately one can see him more often on the truly extremist Echo TV. Not long ago he welcomed Iran’s nuclear capability as a means of “keeping Israel in line.” 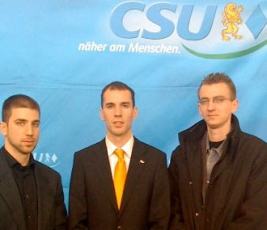 The delegation of Fidelitas in Passau.
Omar Sayfo is the first on the left

Népszabadság found that in 2009, about the time the investigation of the Roma serial murder case uncovered Sayfo’s connection to István Kiss, he was a member of a Fidelitas delegation to Passau to attend the yearly regional congress of Bavarian parties. After Fidesz won the election, he became a civil servant for a while. He was attached to the foreign economics unit of the Ministry of National Economy in 2011. His stay there was short. Within a year the ministry no longer needed his services. The cause of his dismissal, if it was a dismissal, is not known.

One should spend time analyzing Sayfo’s articles in order to paint a richer portrait of the man, but Népszabadság came up with one rather telling quotation. “Those who belong to the dregs of society (literally “mass of lumpen proletarians,” coming from the German Lumpen meaning rags) with free beer and frankfurters in their stomach will take revenge on the government of law and order at election time. No government has dared to touch this issue. In the  last twenty years the democratic institutions have become in part the dictatorship of the parasitic masses in which the lumpen, criminal strata of society will punish not only the decision makers but also the majority of society that would like to live in a country of law and order. One must put an end to this in the interest of both parties.” Perhaps it would have been wise to investigate Sayfo’s background and his close friendship with István Kiss, after all.

I think that an article from 2010 that appeared in 168 Óra and to which “Mutt” called attention on Facebook might have some relevance here. It is a description of a speech by László Kövér, currently the president of the Hungarian parliament, delivered in Jászszentandrás on January 27, 2010. Here is what Kövér had to say. “Of course, in a democracy everybody has voting rights…. In a democracy unfortunately or not, depending on one’s inclination, this is the case. … Of course, everybody should have the right to vote, but they should be able to sell their vote to the state.” According to him, the state could purchase votes for the amount of the prevailing minimum wage. Everybody would do well: the dregs would get money and “we would get rid of those who vote differently.” Crazy yes, but Kövér’s and Sayfo’s ideas are practically identical.

But what about the exclusion of these lumpen elements? Surely, depriving certain people of voting rights is out of the question. Kövér’s idea is outright bizarre, but what about buying these people’s votes in a different way? Viktor Orbán tried to deter them from voting by introducing a system of registration. When that caused alarm both inside and outside of the country, he abandoned the idea. But purchasing votes is not far from the Fidesz leaders’ mind. Sure, they cannot do it officially, but as the Baja by-election demonstrated, it can be done unofficially and with the desired result.

It is unlikely that the investigation into the Roma serial murders will be reopened. For one thing, I don’t think the current government would be interested in the prospect of finding more people with Fidesz ties too close to the case. Because, as is clear from the career of Omar Sayfo, it is almost impossible to say where Fidesz ends and Jobbik begins.