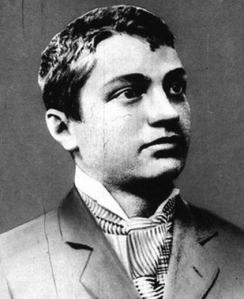 The young Endre Ady in Nagyvárad/Oradea

A friend called my attention to an article written by Endre Ady, the great Hungarian poet, in 1902. For those of you not familiar with Ady’s work, I ought say a few words about him. He came from an impoverished Calvinist petty noble family. The house he was born in was no different from those of the Romanian and Hungarian peasants in Érmindszent, today called Adyfalva in Hungarian and Ady Endre in Romanian. After he studied law for a while in Debrecen he became a journalist, but he left the city soon after. The town later became the symbol of backwardness in his poetry. He moved to Nagyvárad (Oradea) which in those days was considered to be a small but lively cultural center. I might add that Nagyvárad in those days had a very large Jewish population. About 15,000 out of the total population of 60,000. It was here that he met the love of his life, Adél Brüll, whom he called Léda in his poems, a rich married woman originally from Nagyvárad who was living in Paris at the time.

He became a correspondent for Nagyváradí Napló, the local daily. If one takes a look at Ady’s Összes prózai művei one must admire his prodigious output. There were days when he was able to write two or three short essays. On Christmas Day of 1901 he wrote even more. Here is the essay I received this morning. Translating it was difficult; I’m no Ady.

Let us go back to Asia

My beloved lordly [úri]  flesh and blood, the cup is full. We don’t have any right to this place here, so let’s go back to Asia!… Perhaps we will find a small territory somewhere, possibly far away where even the Asiatic people are not inclined toward culture. According to our ancient chroniclers we came here with Árpád, Álmos, and company. But now let’s go back following Stefi Rakovszky, Zoltán Lengyel, Pál Móricz, Jr.[members of parliament] and others. Let’s go while we can.

This lordly crowd with its rich history yesterday managed to sink to the lowest Balkanic level. What happened in parliament yesterday was an entertaining comedy even in its baseness. For a minute I would like to be a treasonous “nationality agitator” so I would be able to fully comprehend with true sensitivity the scandal that occurred in the Hungarian parliament. For such stupidity we were not ready although we have been prepared for everything that can happen here.

Does this country need a parliament? The knout, not parliament. Pardon me, not the knout. Nursery school, kindergarten, and lots of patience if there is anything left of this virtue in the twentieth century.

Vilmos Vázsonyi, the only Hungarian member of parliament who was chosen by self-respecting people, was not allowed to speak in the Hungarian parliament. The children who didn’t allow him to speak are angry because he disturbed their game of merils; the children who play dice at the expense of 19 million people.

This scandal of this most Balkanic parliament opened our eyes. It uncovered the secret that would have been better not ever to be known. We found out that the children of the Hungarian parliament are all the same. It doesn’t matter whether they take their oath to the two-headed eagle, to the dewy pimple of Kálmán Széll, the hat of Lajos Kossuth, the slippers of the infallible Holy Father, it doesn’t matter to what. If one scratches just a little the thick lining of their abstruse cerebrum suddenly they are swarming in front of us in their pitiful similarity.

What did Vázsonyi say? Cultural beasts? In the divine name of culture let’s veto this title. For the sake of the reputation of the beasts because they always dare to show their teeth. Not only when they have something to do with a democratic member of parliament.

My beloved lordly flesh and blood. Asia roared in you yesterday. The nostalgia, the wishful desire of the nomadic, the brutish men broke into a full-fledged attack. I wasn’t there but I see the picture. In the middle there is a goaded single man of intellect. He is knowledgeable, he is ambitious, he is daring, he is determined, they hate him. And–oh, what a horror–his ancestry once-upon-a-time crossed the Jordan River. That little Jewish giant among us. This giant became famous overnight and today thousands adore him and he is knowledgeable. This indeed is the most awful part of it! This man dares to be in our ignorant crowd! And on top of it all, he is Jewish! There he stands confused in the middle of the crowd. A shrill invective can be heard. Zoltán Lengyel yelled, this young  simpleton with insufficient intelligence who in another country couldn’t even be cleaning silverware.  And Mr. Leszkay and Mr. Rakovszky, and other well known idiots. And Vázsonyi leaves this house of comedy in a one-horse buggy.

My beloved lordly flesh and blood. The game of nine-men’s merils that you lose hurts, doesn’t it? Isn’t the slothfulness of the eastern nomadic mentality came to the surface in order to annihilate  this man with instruments we brought along from the Crimea because we can’t fight with his weapons, learning and knowledge? Isn’t it so, my beloved lordly flesh and blood? Because this is the only way to excuse this scandal.

If at all. But not really. Other people are watching us. They see our inability to progress; they see that with Samoyed virtues we are sprawling and wrangling in the middle of Europe as a little piece of  the forgotten Middle Ages. They see that we are empty and they find us wanting. If we want to do something spectacular then we hit a Jew. As soon as we become sober we rush to drink the sweet drink of the colored glory of  the so-called one thousand years. We are idle and good-for-nothings. The parliament, the rock fortress of great nations, is for us good only to discredit it. Where will this lead, my beloved lordly flesh and blood? Because I’m Ur-magyar, not a Jewish peddler [handlézsidó] whom you call everybody who is superior to you. The end of it will be that we will be shown the door from here as if we had never been here before.

Let’s just once be scheming. Let’s go back to Asia. There we will not have to listen to uncomfortably truthful democrats. We will hunt, fish, play a quiet domestic card game and we can meditate about a certain beautiful one-thousand-year-old dream.

Let’s go back, my beloved lordly flesh and blood. Here the letter, the railway kill us. Moreover, there are too many Jews here who keep urging us to go forward. Down with the frills, swords, blessed rosaries, cards, flasks, greyhounds, race-horses, and ancestors! Let’s go back to Asia!