An English-language article on Viktor Orbán’s infamous speech of July 26 claimed that Orbán has a brilliant mind. I don’t know on what basis the author came to this conclusion because most people find Orbán’s ideas incoherent and confused. Moreover, it seems that some of his closest associates considered his “philosophical reflections” on the state of the world unnecessary, perhaps even dangerous. But Orbán defended his decision to deliver the kind of speech he delivered because he as prime minister of Hungary has a unique view of the world which he ought to share with the people.

Here I venture to suggest that it is not his unique political role that has given birth to his “revolutionary” ideas. The “birth mother” is instead a trusted adviser who is described by those familiar with his work as an ideologue. Few people even know his name, although it is becoming ever more apparent that Viktor Orbán’s “system” in large part stems from his adviser’s harebrained ideas.

Who is this man? His name is Gyula Tellér. He is apparently an excellent translator, but his real passion is political theory. He started his political career in SZDSZ but soon enough switched allegiance to Fidesz. Tellér was one of the authors of SZDSZ’s party program of 1990; a few years later he had a hand in formulating Fidesz’s program. To understand this man’s thoughts one ought to read Zoltán Ripp’s excellent essay “Color changes of an éminence grise” (Egy szürke eminenciás színeváltozásai). 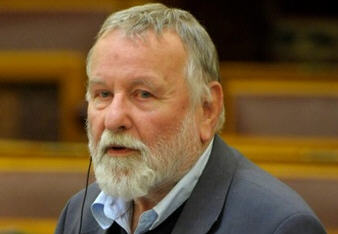 I cannot summarize Ripp’s long and sophisticated essay in a few paragraphs here. Instead I will concentrate on some less weighty articles that appeared after Gyula Tellér’s ideological influence on the prime minister was discovered.

Ilidkó Csuhaj, who is a political reporter for Népszabadság and therefore not a historian or political philosopher, simply said that “Orbán recited a study of Gyula Tellér in Tusnádfűrdő.” According to Csuhaj, Viktor Orbán was so taken with an article Tellér wrote in the March issue of Nagyvilág (“Was an Orbán system born between 2010 and 2014?”) that he assigned it as compulsory reading for all his ministers.

Unfortunately, the connection between Gyula Tellér and Viktor Orbán goes back much farther than March 2014. From a careful reading of Ripp’s essay and Tellér’s own works it is absolutely clear that Viktor Orbán has been mesmerized by this man’s confused and dangerous ideas.

One of his “theories” explains the force of so-called “solidified structures.” Tellér here refers to the Kádár regime: both its elite and its social structure remain part of life in Hungary. No real regime change, he argues, will take place until those remnants of Kádárism are destroyed on every level: in science, in culture, in art. Everywhere. Anyone who achieved anything in the old regime must be stripped of his position in society. An entirely new middle class has to be created. That’s why for Tellér and hence for Orbán the so-called regime change of 1989-1990 is an increasingly insignificant event.

Another theory of his is that in Hungary there are three societal groups: (1) the old feudal Hungary and its later offshoot, the Hungarian upper middle classes; (2) the bourgeois Hungary; and (3) the old Rákosi socialists who simply changed their colors to become leaders and beneficiaries of Kádár’s Hungary. Initially he was critical of feudal Hungary, but as time went by he began to look upon the Horthy regime as an acceptable and perhaps imitable system.

Tellér started embracing international conspiracy theories, plots hatched abroad against Hungary. He became an enemy of globalization and capitalism. The mover and shaker of Hungarian life in his view became the foreign “investor.” From here Tellér easily arrived at anti-Semitism and is thus considered by Ripp, for example, to be a successor to István Csurka. That’s why Ripp colors Tellér “brown” at the end of his essay. Others are less polite. One blogger (orolunkvincent) calls Tellér “a Nazi madman”  and compares him to Aleksandr Dugin, the man behind Putin’s ideas. The blogger quotes extensively from Tellér’s writings and speeches in which he exhibits fervent anti-Semitic views.

Another blogger (democrat) complains how unfortunate it is that “a single man is behind the whole concept” of Viktor Orbán’s political agenda. Behind Orbán’s “grandiose plan” is Gyula Tellér, whom some people call a crackpot. In Tellér’s paranoid worldview, “the world is against Orbán, who is ready to make the country successful with a brilliant new system, but he is oppressed by the ugly and evil foreign (and Jewish and Marxist) capitalists.”

And here is the latest Tellér gem, uttered at a conference only yesterday. He delivered a long lecture on his interpretation of Hungarian history and politics over the last 50 years. He claimed that “the change of regime began in 1955” when “a well-informed group of people” realized that socialism cannot survive in its present form. Who were they?  They were representatives of “a well-known and significant sub-culture” whose task was “running the economy, the financial system and the press.” He continued by saying that the “members of this group had numerous offspring who learned from their moms and dads that socialism is kaput.” These children of communist parents therefore became liberals and had a large role to play in 1989-1990. So, these people are still with us.

Although Tellér does not name this group, anyone who knows anything about the political culture of the Hungarian right knows that this was an anti-Semitic harangue. Of course, the whole “history” is outright crazy because it assumes that some people are blessed with extraordinary insight into the future. They know exactly what will happen in forty or fifty years and prepare themselves as well as their children for this eventuality.

Today an article appeared on ATV’s website in which Gábor Gavra, its author, gives a list of Tellér’s ideas that can be found in Orbán’s “national system.” The list is too long to repeat here, but it is frightening. Almost as if every aspect of Orbán’s system came straight from Tellér’s ideas. I think it is time to reevaluate Viktor Orbán’s ideology because its origins can be traced to the ideas of a man who holds far-right and anti-Semitic views.

One of the readers of Hungarian Spectrum suggested that we should discuss István Hegedűs’s article in Élet  és Irodalom which also deals with the Bálint Magyar thesis of the post-communist mafia state. First a few words about István Hegedűs. As opposed to Bálint Magyar and Gábor Horn, Hegedűs was one of the leading members of Fidesz prior to 1993, when he and others became disillusioned with the direction in which Viktor Orbán and László Kövér were leading the party. Some of the more important “dissidents” besides Hegedűs were Gábor Fodor, Klára Ungár, Péter Molnár, and Zsuzsanna Szelényi. At that time only Gábor Fodor continued a political career (in SZDSZ) while the others abandoned politics altogether. In the last few weeks, however, Zsuzsanna Szelényi has reappeared in Együtt 2014-PM as a spokesperson on matters of education. Hegedűs is a sociologist with a long list of publications, some of which are available in English. He is especially interested in the media, political parties, and the European Union. He teaches at École Supérieure des Sciences Commerciales d’Angers (ESSCA)’s English-language division in Budapest. In 2001 these five dissidents wrote a fairly lengthy book about the early years of Fidesz. I started rereading it this afternoon and came to the conclusion that it is perhaps even more valuable today than it was twelve years ago. After all, since then we have found out a great deal about the Fidesz leadership and the mechanics of the party’s inner workings. So, what does Hegedűs think of Bálint Magyar’s thesis? As opposed to Gábor Horn, he considers Magyar’s “conception a systematically elucidated, comprehensive and convincing construction.” However, Hegedűs points out that there are many other observable characteristics that cannot be explained solely by the mafia-state mentality. The mafia-state might be a perfect description in the economic sphere but not necessarily in the political realm. Age-old concepts like one-man leadership, a system of political clientele, interpenetration of party and state, plunder, populism, nationalism, and authoritarian worldview are all still present in Orbán’s system. One can also contemplate to what extent Orbán’s Hungary is really the result of  the “dear leader’s” personality. Hegedűs, as opposed to Magyar, concentrates more on ideology and politics as opposed to societal organization by mafia-like methods and finds the Fidesz regime’s political philosophy “barren.” Hegedűs points out that “behind the two-thirds majority there is no new vision despite the transcendent phraseology of the constitution.” The rhetoric of anti-communism, anti-liberalism, growing anti-European sentiments, nationalism, and the opponent-enemy linkage is nothing new in Fidesz political discourse. Unfortunately, this rhetoric kindles only a negative identity, although Hegedűs admits that turning to ultra-conservative ideas might promote cohesion within the group. Fidesz’s emphasis on strengthening the middle classes is not new either. MDF also based its politics on the idea. Yet Hegedűs is convinced that in addition to the “inner motivation of missionary zeal” one must take into account the role of ideology, “This inner driving force cannot be seen from the outside … because individual political groupings live in their own alternative reality and they judge or condemn the aspirations of their opponents exclusively on moral grounds.”

Hegedűs was once part of the Fidesz party elite. He assumes that at the very top there are still most likely mechanisms that allow members of the inner circle to disagree and to think independently, but only within the framework of certain axioms that cannot be questioned. It is most likely very difficult to find one’s way in the jungle of intrigue, infighting, favoritism, compromise, and alliances that any leader faces. That is why “a pragmatic, completely mafia-like regime … is not as clear-cut inside a party or a political organization” as in businesses dealing of the party. What further complicates any assessment of the workings of the party leadership is the arrival of newcomers who are not party members and whose only connection to Fidesz is Viktor Orbán. Infiltration from the outside began already in the early 1990s but became massive with the arrival of members of the political cells (polgári körök) created by Viktor Orbán after the 2002 lost elections. Yet Hegedűs claims that the workings of the Fidesz top leadership most likely haven’t changed fundamentally since the early 1990s, which eventually led to the split between followers of Viktor Orbán and Gábor Fodor. Even my superficial reading of bits and pieces of the participants’ remembrances of that split in 1993 reinforces the notion that Viktor Orbán, László Kövér and Zsolt Németh didn’t change as much in the intervening years as outsiders think. I tend to agree with István Hegedűs, who says that “as far as the methods of inner power relations are concerned, we don’t know of any such changes that would distinguish the present time from the situation of 1993-1994 when Orbán and his close associates turned to the right.”