As promised, today I will write a few words about the worsening U.S.-Hungarian relations, not that they have been all that good over the last few years. Magyar Nemzet, the flagship of the Fidesz media empire, has been publishing one vitriolic editorial after the other. The same is true of Magyar Hírlap and the television stations HírTV and EchoTV. The attack is two-pronged. On the one hand, they accuse the United States of interference in the affairs of other countries and, on the other, they charge the U.S. with uncritical support of Israel all the while unjustly accusing Hungary of anti-Semitism.

Here I have selected three articles to give a sense of recent anti-American sentiment among the Hungarian right. Two of the authors work for Magyar Nemzet. They are Tamás Fricz, who is a regular contributor, and István Lovas, the paper’s correspondent in Brussels. The latter’s “Open Letter to the Chargé of the U.S. Embassy in Budapest” actually appeared on a far-right internet portal Flag Magazin. Both pieces were republished on nemzeti.net, which aggregates articles from hundreds of far-right online publications. It is a treasure trove for those interested in the activities of the Hungarian far right. The third article appeared in Magyar Hírlap and is from Zsolt Bayer, about whom I wrote several times. His targets are liberals, the foreign press, Jews, and anyone who criticizes the Hungarian government–for example, Ulrike Lunacek, an MEP from Austria. In comparison to some of his other writings this particular piece is tame.

I haven’t said much about István Lovas in the past and I will not have time to do so today. I will say only that he is one of the most unsavory characters in the Hungarian right-wing media, and that is something. Although he has some Jewish ancestors, he is a vicious anti-Semite. His open letter to André Goodfriend was occasioned by the visit of  Ira Forman, who was  appointed by John Kerry to be U.S. Special Envoy of the Office to Monitor and Combat Anti-Semitism.

Forman gave an interview to MTI, the Hungarian news agency, on July 21 in which among other things he talked about the unfortunate situation that developed over the 70th anniversary of the Hungarian Holocaust and the memorial the Orbán government insisted on erecting despite strong opposition from Jewish and non-Jewish groups. He stressed that this is not only his personal opinion but also that of the U.S. government. Forman talked about the growing anti-Semitism in Europe ever since the beginning of the 21st century, especially in countries with large Muslim populations. But, he added, in Hungary “there is another kind, the classical 19th and 20th century Nazi type of anti-Semitism.”  And since there is a fairly large Jewish presence in Hungary, his office follows the situation closely.

One can quibble about the accuracy of this statement. After all, we cannot talk about a Nazi type of anti-Semitism in the nineteenth century. Perhaps “political anti-Semitism” might have been a better choice of words. And one might argue that Forman’s description of the Hungarian situation is far too general. But we can definitely say that the Hungarian far right’s political views bear a suspicious resemblance to those of German national socialism. And that the far right is represented in the Hungarian parliament.

It was a few days after this interview that Lovas decided to attack André Goodfriend, who is currently heading the U.S. Embassy in Budapest.  He charged that the embassy is the only one “in the whole world” whose chief activity is “the struggle against anti-Semitism.” Instead of concentrating on Hungary, the U.S. government should worry about the “death of Palestinian infants, children, women, nurses, and doctors.” He described the situation in Gaza as a “massacre.” Then follows a very long list of anti-Semitic incidents in various European countries. At the end he returns to the person of the American diplomat. Without telling the reader what terrible sin André Goodfriend personally committed, he asks him what he is afraid of. “To tell the truth?” And obviously this truth is the reason “why all U.S. embassies must be barricaded and surrounded by guards.” As time goes by they will need more and more barricades and guards.

Tamás Fricz, to the shame of the Hungarian Academy of Sciences, is a senior researcher at its Institute of Political Science. He also teaches political science at the University of Miskolc. Interestingly enough, he didn’t major in political science but received a degree in finance and accounting not at a university but at a three-year college. After graduation he enrolled at ELTE but, again, not as a student of political science but of philosophy (1985-1989). In the 1990s he received a doctorate, a title that no longer exists, from the University of Economics, today called Corvinus, but in what field it is hard to tell. That doctorate was then automatically morphed into a Ph.D.

He wrote his anti-American article after the condemnation of Viktor Orbán’s speech by The New York Times and The Wall Street Journal. Fricz opines that The New York Times‘s editorial pretty well reflects the views of the American government. How do they dare call on the European Union to reduce EU subsidies to Hungary or take away her voting rights? “We are amazed.” What would happen if the Frankfurter Allgemeine Zeitung or Le Figaro demanded sanctions from the president against one of the states, he asks? Perhaps the United States should ask for membership in the European Union and pay the contributions member states of the EU have to pay.

Fricz continues his harangue against the United States by pointing to its military involvement in Afghanistan and Iraq. The United States’s fight against Taliban “terrorism” led nowhere. The same thing happened in Iraq where “they introduced democracy” and the only result is that there is now total chaos in the country. He explains that “free elections, human rights, rights of citizens in themselves are not enough for the establishment of real democracy. Cultural, historical, societal, religious preconditions must be present for the establishment of democracy and we must declare that these preconditions are stronger than the institutional prerequisites.” How true! What Fricz does not seem to recognize is that he just condemned his own country as one of those lands where these preconditions of democracy don’t exist. I doubt that he thought this through. 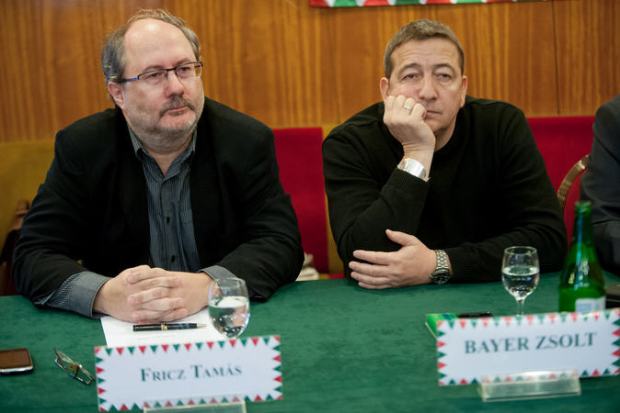 Zsolt Bayer’s piece is just as primitive as the others. Bayer is one of the 37 founders of Fidesz. At the time he was a student of Hungarian literature and history at ELTE. He likes to show off his vast knowledge of history, literature, and philosophy. He is a name dropper. In his “Open letter to the New York Times” he starts off with Nietzsche and finishes with Ortega y Gasset, to which he adds: “It was Ortega who wrote these lines. I don’t suppose you [the editors of The New York Times] understand them.”

The gist of the piece is how much better Hungarians are than Americans. Because they did not start wars “under false pretexts”; they did not ignore the verdicts of international organizations; they did not legalize torture; they did not hold prisoners in Guantanamo; they don’t spy on other people, including their allies; and finally the Hungarian head of state does not have the right “to liquidate people” without consulting with the judiciary as the American president has. I assume Bayer is referring here to a speech by Attorney General Eric Holder at Northwest University in 2012, I believe in connection with American militants like Anwar al-Awlaki.

The Ortega quotation is amusing because it has nothing to do with Orbán’s lecture on “illiberalism.” Ortega is considered to be a “liberal philosopher” and therefore it is hard to believe that he thought that “liberals … were old-fashioned people who marched under faded flags.” The quotation is most likely taken out of context because the portion Bayer quotes begins: “Why are they satisfied with the repetition of ready-made ideas?” Moreover, these old-fashioned people can be either liberals or reactionaries. So, clearly, Ortega is talking about non-thinking people in general.

This is how the open letter ends: “Your obese society is marching under the faded flag of liberalism. Without a thought, pitifully. But you must understand one thing: you have no right to interject yourselves into the affairs of other societies and their future. Is that clear?”

In case you think that one ought not to pay much attention to these lunatics, consider the opinion of a man who in his former life was a respected British scholar and who subsequently became the refined voice of Viktor Orbán in the European Parliament–George Schöpflin. This is what he had to say about the possible effects of the Orbán speech: “it might even be that a decade from now the Bǎile Tuşnad speech will be referred to as the audacious and courageous forerunner of necessary change. Of course, it could be that it will not be. But in that case, democracy will be in trouble.”