A few months back I ended one of my posts with a question: How long will the Romanian-Hungarian love affair that Viktor Orbán and  Traian Băsescu initiated back in 2009 last?

In the last few days over 200 articles have appeared in the Hungarian media on the “székely (Szekler) flag.” Before I venture into the tiff over the flag, let’s look at who the Szeklers or székelyek are. The origin of those Hungarians who live in Covasna (Kovászna) and Harghita (Hargita) counties in the eastern part of Transylvania is shrouded in mystery. Perhaps the most accepted theory is that they were originally a Turkic group that came along with the other Hungarian tribes to present-day Hungary. They were already Hungarian speaking at the time. Originally they settled in Bihor (Bihar) county around Oradea (Nagyvárad). From there they moved farther east and guarded the eastern regions of the Kingdom of Hungary. 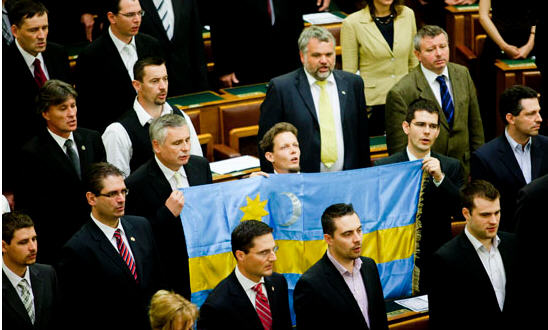 As for the origin of the flag, it is even murkier. The Székely Nemzeti Tanács (National Council of Szeklers) claims that the design they came up with was inspired by the flag of the only Szekler prince of Transylvania, Mózes Székely (1553-1603). However, the flag attributed to Mózes Székely was not his heraldic flag but a so-called battle flag he received as a gift from Prince Zsigmond Báthori before a battle led and lost by him against the royal Habsburg forces. It was just one of many such flags and was never associated with the Land of the Szeklers. I think one can safely say that this flag is a new symbol for the Szeklers, who are currently demanding territorial autonomy within Romania.

So, what happened that caused a diplomatic spat between Romania and Hungary? Last month the prefects of the two dominantly Hungarian inhabited counties forbade flying the székely flag on private or public buildings. This flag had been displayed in Romania since 2010. László Kövér, speaker of the Hungarian parliament who supports the National Council of Szeklers, ordered the display of the flag on the parliament building in November 2010. In January 2012 the demonstrators of the Peace March demanded, among other things, autonomy for the Land of the Szeklers and carried hundreds of Szekler flags. The demand for Szekler autonomy spread beyond Transylvania and gained increasing support in Hungary.

After the Covasna County Court ruled that the Szekler flag cannot be displayed in Romania a local leader of RMDSZ asked Hungarian mayors to fly the Szekler flag in a display of solidarity. That was on January 18, and ever since one after the other, especially the more radical Fidesz mayors, have obliged. First it was Siófok that displayed the flag, then Budafok, and a few days later District VII, the historic Jewish quarter of Pest. No wonder that a blog writer who lives there made fun of all those Szeklers who inhabit Erzsébetváros.

Zsolt Németh, undersecretary of the foreign ministry, attended the ceremony that accompanied the display of the flag at the Budafok City Hall on February 5. There he delivered a speech in which he called the Romanian decision to ban the Szekler flag “symbolic aggression” and urged other mayors to follow suit. He insisted that “the steps Romania has taken lately are contrary to Romanian-Hungarian cooperation, the values of strategic partnership, and the norms of the European Union.”

A day later the Romanian prime minister, Viktor Ponta, answered in kind. Romania will not tolerate any interference in Romania’s domestic affairs. He described Németh’s remarks as “impertinent” and called on Romania’s foreign minister to make a vigorous response to the Hungarian government concerning the issue. Bogdan Aurescu, undersecretary of the Romanian Foreign Ministry, considered Németh’s words to be support for territorial autonomy, which the Romanian constitution forbids.

On the very same day Oszkár Füzes, the Hungarian ambassador, was called into the Romanian Foreign Ministry. During the conversation the Hungarian ambassador apparently said that Hungary supports the display of the Szekler flag in Romania. Moreover, he gave an interview to a Romanian television station where he stated that his country supports the Szeklers’ demand for territorial autonomy and gave a piece of advice to the Romanians: they should change their constitution and make Romania a multi-national state. At this point the Romanian foreign minister threatened Oszkár Füzes, who had gotten into trouble earlier in Romania, with expulsion. He added that even before possible expulsion Füzes will be persona non grata in Bucharest. He expressed his hope that Budapest will be able to keep its ambassador in line; if that effort is unsuccessful, “his mandate in the Romanian capital will be short-lived.”

János Mártonyi came to the rescue of his ambassador in Bucharest: “Oszkár Füzes did not say anything on the question of Szekler autonomy that would be different from the opinion of the Hungarian government.” Hungary’s position hasn’t changed with respect of Szekler autonomy in twenty-two years. He added that “we were not the ones who started the war of the flags.'” Zsolt Németh also put in his two cents’ worth, saying that “they are ready to negotiate but the solution is in the hands of Romania.”

RMDSZ, a much more moderate Hungarian party than either Fidesz or the Szeklers’ Magyar Polgári Párt, looked upon all this with trepidation. According to György Frunda, adviser to Viktor Ponta, this “diplomatic scandal” hurts the Hungarian community in Romania. Hunor Kelemen, chairman of RMDSZ, considered Zsolt Németh’s words inflammatory, adding that the fate of the Szekler flag is not in the hands of Hungarian politicians.

Today János Martonyi phoned the Romanian foreign minister, Titus Corlăţean. From what we can learn from the Hungarian news agency’s report, the two agreed to disagree. But “the negotiating partners concluded that the lessening of tensions is mutually desirable.” They will continue negotiations and “they count on the contribution of the diplomatic corps.” So, it seems that Romanian-Hungarian relations are currently so bad that the conflict needs the mediation of outsiders. It sure doesn’t sound too promising.