Every time there is a verdict indicating that the independence of Hungarian judges is still more or less intact (as opposed to, for example, that of prosecutors) we are inclined to praise the high quality of Hungarian judges. Critics of the Hungarian judiciary, however, argue that it was not the best and the brightest of law school graduates who ended up as judges and prosecutors. The smartest, especially in the last two decades of the Kádár regime, opted for a more lucrative path: joining burgeoning law firms. They also point to the declining prestige of the profession–one sign, unfortunately, being the number of women on the bench. In the county courts women often make up 70% of the judges. The situation is a little better in the newly created appellate courts and in the Kúria, but even there only 47-48% of the judges are men.

Here is a case that lends some credence to the critics’ argument. It unequivocally demonstrates that among the 2,800 sitting judges at least one doesn’t belong there. The outcry is not over this particular judge’s incompetence but rather over her overt racism. I will certainly address the racist aspect of the story, but I would also like to emphasize something others failed to do: her incompetence and obtuseness.

Let’s start with her professional incompetence. Way back in 2011 the Prosecutor’s Office of Békés County asked the court to dissolve a paramilitary organization called the Association for a Better Future (SZJE). The same organization also bears the name Better Future Hungarian Self-Defense. It was in April 2010 that the group was established by former members of the already dissolved Hungarian Guard, whose activities threatened the rights and freedom of others. So, on the face of it, the case seemed simple enough. If the Hungarian Guard was deemed to be an illegal organization, then this new organization, born out of it and having the same goals, should have been illegal too.

Nothing much happened between 2011 and now. At least not in the Hungarian justice system. But if you take a look at the Better Future website, you will see that the members of this paramilitary organization have been busy all over the country. They target the Roma exclusively. Their members patrol the streets of heavily Roma villages and small towns. They march in military formation and wear uniforms, intimidating the Roma population of these villages and towns. Surely, this is their goal. Among other places, the members of the group were present in Gyöngyöspata in 2011, an event that attracted worldwide attention. I wrote about it in May 2011.

So, let’s see what Erika Mucsi, the judge in the case, had to say about this paramilitary organization and its possible effect on the Roma population in Gyöngyöspata. According to this intellectual giant, “the frightening activities of SZJE cannot be proven because at the time other organizations were also present: Véderő, Betyársereg, and Csendőrség.” Although the official civil patrols who work hand in hand with the police themselves pressed charges against the SZJE because of its illegal and threatening activities, Mucsi didn’t find anything wrong with SZJE members marching in military columns and following military commands, both of which are against the law. Mucsi admitted that “such activities may cause distress in the local community, but public marching itself is guaranteed by the right of assembly.” And “walking around with the purpose of preempting crime is the right of every citizen (állampolgári jog).” It should be noted that the Court of Human Rights confirmed the judgment of the Hungarian court that dissolved the Hungarian Guard on precisely the charges Erika Mucsi found lawful. So much for the woman’s professional expertise.

And then there is her open, unabashed racism. According to her, “the Roma as a category should not be characterized primarily on the basis of race, but rather as a group separated from the majority by its disregard of the traditional values cherished by the majority. They follow a work-shy existence, they don’t respect private property and accepted morality.” This kind of generalization would be unacceptable in general, but that it was written in an opinion of a judge is truly outlandish. Especially since Erika Mucsi must have visited the website of SZJE and therefore had to know that this paramilitary organization has only one aim: the harassment of the Roma. And not just in villages but everywhere. For example, they seem to be active, without any interference by the authorities, in Pécs. SZJE is elated by its successful defense. And it is not alone. The websites of the best-known extremist groups praise Erika Mucsi to the skies.

The prosecutors are obviously stunned, and they are appealing the case. Even the spokesman of the Békés County Court (Gyula Törvényszék), expressed the court’s total disapproval of Mucsi’s unacceptable racist opinions. The spokesman indicated that there might be consequences of Erika Mucsi’s injudicious handling of the case.

While the extreme right is rejoicing, the legal defense groups are up in arms: the Hungarian Helsinki Committee, TASZ, the Károly Eötvös Intézet, just to mention a few. The spokesman of the Kúria diplomatically called attention to the fact that the verdict is not final and therefore the case is not closed. The extremists’  joy might be short-lived. It is very unlikely that the Szeged Appellate Court will give its blessing to such an absurd verdict.

Sajóbábony, a small town of 2,000 inhabitants 13 km from the city of Miskolc, has been in the news off and on since 2009, shortly after the random murders of Gypsies in several towns and villages. In the aftermath of these murders the Hungarian Roma population was not surprisingly jumpy and fearful. Intensifying their fear was the activity of Jobbik and the Hungarian Guard, its paramilitary unit. Guardists often appeared in towns with a large Roma population, almost as if they wanted to provoke some kind of conflict with the Gypsies.

In November 2009 the Hungarian Guard decided to move about 600 of their members to Sajóbábony, and Jobbik organized a political gathering in the town. The local Roma community felt threatened and unprotected by the police. Some of them decided to defend themselves, apparently armed with axes, swords, and canes. When they saw a dark car going through their neighborhood, at least nine people attacked it. The two people in the car, who were members of the Hungarian Guard, received minor injuries.

As a result of this incident the nine people involved in the incident were arrested. Last May the Miskolc court found them guilty. According to the prosecutors, in the course of attacking the car the Roma threatened to kill “the stinking Hungarians.” All of the accused denied the charges and claimed that they simply sent “the filthy guards back to where they came from.” Notwithstanding their protestations, all nine were found guilty of a hate crime directed against a distinct community, in this case against the Hungarians. Each received between two years and six months and four years in jail.

This was not the first time that a law designed to protect members of a minority against the aggression of the majority was invoked by Hungarian judges to rule in favor of the majority. There were two very similar cases to that of Sajóbábony, one in 2010 and another in 2011, in which the defendants were found guilty of committing a hate crime against the Hungarian community.

In the wake of the verdict TASZ (Társaság a Szabadságjogokért), the equivalent of the American Civil Liberties Union, released a communiqué in which they stated that the verdict is based on entirely wrong premises. Serious legal mistakes were committed. Yes, the defendants should have been charged with disorderly conduct or breach of the peace, but they should not have been convicted of a crime motivated by racism. After all, they attacked the car because they thought that members of the Hungarian Guard were inside, whom they suspected of intending to harm them and their community. They didn’t attack them because they were Hungarians. TASZ actually accused the court of racism.

As soon as the verdict was handed down the nine Gypsies decided to appeal, right then and there. They made the wrong decision. The appellate court (ítélőtábla) in this particular district is in Debrecen. There, on September 30, the court decided that the lower court’s verdict was not harsh enough. What these nine people did was so heinous that longer sentences were warranted. Instead of sentences ranging from two years and six months to four years, their jail time was extended to between three years and six months and five years and four months. 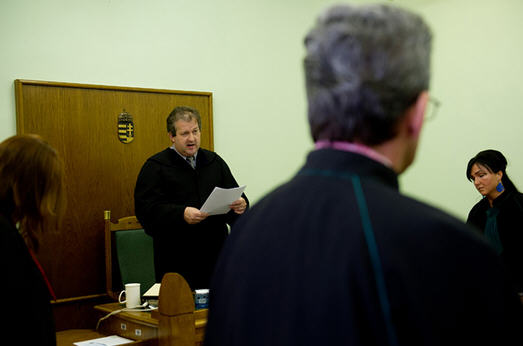 TASZ released another communiqué in which they reiterated that the motivation was not anti-Hungarian prejudice but fear of an attack by the Hungarian Guard members. Moreover, the court did not consider the background leading up to the encounter. The judge neglected to give reasons for considering the attack on the two people in the car a hate crime directed against the Hungarians. Moreover, “the essence of violence against a given community is that the perpetrator is prejudiced toward a group which he considers to be inferior.” From the testimony of the accused it is clear that it was not “anti-Hungarian prejudice” that motivated them.

It often happens that racist attacks on Gypsies go unpunished while Gypsies are convicted on charges of racism. “All that makes it look as if in Hungary the Roma were responsible for racism and not that the Roma are the ones who are fearful because of their ethnic origin.” Clearly, the communiqué continued, the members of both the Miskolc district court and the Debrecen appellate court are racists themselves since they declared the Gypsies to be racists because they got embroiled with members of the racist, anti-Semitic, homophobic, xenophobic, ultranationalist, irredentist Hungarian Guard. There is no appeal. The verdict is final.