The deadline had long passed and Viktor Orbán’s promised answer to Mazsihisz’s three demands to ensure their participation in the events of the Holocaust Memorial Year still hadn’t arrived. So, it’s no wonder that Népszabadság headlined one of its articles “Orbán is ruminating.” And indeed, I don’t think that it was easy for a man who is not accustomed to retreating to admit that, despite all the power he acquired within the country, he might have to back down on the idea of erecting a monument to the German “occupation” of Hungary on March 19, 1944.

On February 16, in his “state of the nation” speech, he was still adamant and denounced those who “dare to tell us what we should or should not do, or what and how we should remember.” Commentators were convinced that Orbán would stand fast and wouldn’t give an inch.

There were other signs, however, that those harsh words were only for show. Zoltán Balog told ATV on Tuesday that the topic will most likely be “discussed” on Wednesday at the cabinet meeting. Mind you, we know from an earlier Balog interview that “discussing” something at the cabinet meeting means that all those present simply lend their support to Viktor Orbán’s decision. Still, he wasn’t the only one who indicated that the infamous memorial might not be in place on Szabadság tér on March 19. István Pálffy (KDNP) also suggested that it would be impossible to erect the structure given time constraints. Presumably they knew something even before the cabinet meeting.

Although word about the postponement became official only last night, the well-informed Ildikó Csuhaj of Népszabadság already knew about the decision a few minutes after the cabinet meeting. Her sources indicated that there was intense international pressure on the government, including German disapproval. Israel also made its feelings known by requesting the newly appointed Hungarian ambassador to have a heart to heart with officials of the Israeli foreign ministry.

After the decision was reached, Orbán wrote his long-awaited letter to the leaders of Mazsihisz. In it he mentioned, as Fidesz politicians always do, that the Holocaust Center was established during the first Orbán government and that it was during his first term that they declared April 16 to be the day devoted to the memory of the victims of the Holocaust. On the other hand, he completely ignored the controversy surrounding the Holocaust Memorial Year: the falsification of historical facts symbolized by the planned monument, the appointment of a far-right historian to a newly established institution called Veritas who considers the Kaments-Podolskii deportations and murders of mostly Hungarian Jews a simple “police procedure,” and the concept and the person in charge of the planned House of Fates. Instead, Orbán claimed that the reason for postponing the erection of the “Gabriel” statue is the campaign season for national and EU elections that takes place between February 15 and May 25.

The contents of this letter didn’t make the slightest difference as far as the leaders of Mazsihisz were concerned. They announced that there is nothing in this letter that would necessitate calling together the entire leadership which decided on the boycott in the first place. This is only a postponement of the statue, with no mention made of the two controversial historians, Sándor Szakály of Veritas and Mária Schmidt of the House of Fates.

Two fundamentally opposing historical views are clashing here, and in my opinion truth is not on the Orbán government’s side even if they decided to name their new historical institute Veritas. I want to make one thing clear. It is not only the Jewish community that cannot accept the Orbán government’s efforts to rehabilitate the Horthy regime. More enlightened members of Hungarian society, both Jewish and non-Jewish, are only too aware of the respective Hungarian governments’ roles between 1920 and 1944 that resulted in the deaths of millions of Jews and non-Jews.

Some people are not surprised that in the last twenty-five years perhaps the majority of Hungarians refused to look critically at their own past. After all, they say, it is a painful process, and it took at least that many years for the Germans to do the same. So far so good, but the difference is that now, twenty-five years after the regime change, instead of turning the corner and facing harsh facts, the Orbán government is doing everything in its power to prevent the kind of dialogue that might result in a fair assessment of Hungary’s twentieth-century history. In fact, it is undoing the fairly sophisticated re-examination of the past that already began to take place in the second half of the Kádár regime. Admittedly, publications on the Holocaust and in general on Jewish affairs are much more numerous today than in the 1970s and 1980, but I still have some very valuable books from those days in my own library.

Finally, I would like to talk briefly about two issues. Today Ilan Mor, Israeli ambassador to Hungary, and Sándor Pintér, minister of interior, gave out decorations to those who saved Jewish lives at their own peril during the Holocaust. Ambassador Mor bestowed the Yad Vashem’s Righteous Among the Nations awards to the children or grandchildren of ten Hungarians. Alongside the Israeli awards, Sándor Pintér gave out decorations “For Bravery.” I didn’t find a lot of information on this bravery award except that it is given to firefighters. Even a German Shepherd dog received it not so long ago. 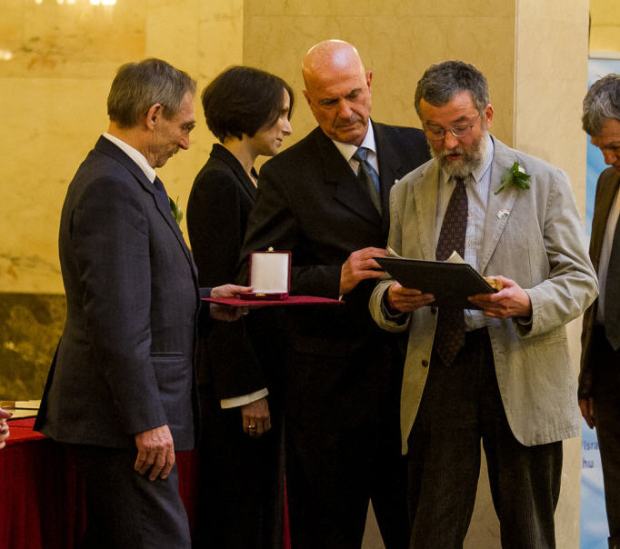 Mihály and Szabolcs Fekete-Nagy at the award ceremony

One of the awardees was Béla Fekete Nagy (1904-1983), a well-known painter, whose two sons were at the ceremony to receive their father’s posthumous award. Mihály and Szabolcs  Fekete-Nagy accepted the Yad Vashem award but would not accept the “For Bravery” decoration from Sándor Pintér. Mihály delivered a speech which the cameramen muffled, but the message was that they would defile the memory of their father if they accepted the decoration from the minister of interior of the Orbán government.

I also just learned that in the last four or five months the government allegedly stopped all subsidies to the Holocaust Memorial Center with the result that this month the Center cannot even pay the meager salaries to its employees. This stoppage of funds might be a bureaucratic mix-up, but given the present tense relations between the government and the Jewish community it might be more than that. Perhaps the goal is to put pressure on the Holocaust Center to convince Mazsihisz to be less rigid and make a deal with the Orbán government. Or there might be another explanation. As we have learned, the Orbán government had rather strong objections to the leadership and concept of the Center. Since, as Mizsihisz argued, two Holocaust centers in one city are not really necessary and since this administration came forth with the idea of the House of Fates, it might want to marginalize or eliminate the Holocaust Memorial Center. I’m just guessing, but whatever the reason it most likely reflects the Orbán government’s two-faced attitude toward the Hungarian Jewish community.