In today’s post I’m relying heavily on an excellent article by Attila Ara-Kovács on the background of the Szeklers’ demand for territorial autonomy in Romania. The Szeklers (in Hungarian székelyek) live primarily in the hills and valleys of the Eastern Carpathian mountains in three neighboring counties: Harghita (Hargita), Covasna (Kovászna), and in parts of Mureş (Maros). Although the exact circumstances of their settling and their precise ethnic origin are controversial, we know that today’s inhabitants of these three counties have been living there from time immemorial. According to the Hungarian Etymological Dictionary, the written word “székely” dates to at least 1092.

But back to the present. According to the latest census 612.043 Hungarians who call themselves Szeklers live in these three counties, which are perhaps the least developed and poorest regions in Transylvania. Their growing demand for autonomy was prompted by Romanian efforts to rethink the country’s administrative borders. The European Union urged member countries to create regions that would take into consideration a healthy economic mix. Such plans were also underway at one point in Hungary, but they died a slow death, mostly at the hands of the officials of the traditional county administration. Fidesz was also not about to give up the one-thousand-year-old tradition of the county system. After all, it was Saint Stephen who set it up.

In Romania the debate began already in the early 1990s, but it was only in 1998 that a final decision was reached. Romanian officials introduced an administrative set-up consisting of 6 regions whose borders were drawn in such a way that the counties where the Szeklers are in the majority were attached to a larger unit made up of Alba (Fehér), Sibiu (Szeben), and Braşov counties. In this mix, the Szeklers were in the minority, just over 20% of the population. This arrangement was not only unfavorable to the Hungarian minority but also made no sense economically.

Eventually the Romanian government came up with a new arrangement which they are planning to introduce soon. The three Szekler counties will be attached to Braşov county, the second most developed and industrialized part of Romania after the Bucharest region. In this new region the Hungarians will make up 43.85% of the population, a considerable improvement over their present situation. As Ara-Kovács points out, one could carve out a unit consisting only of the three Szekler counties so that the Hungarians would have an absolute majority, but such an arrangement would leave these three counties without any outside, sorely needed financial resources.

The recent demonstrations are in part directed against this plan of forming a larger economic and administrative unit from Braşov, Covasna, Harghita, and Mureş counties. In addition, the Szekler National Council, the chief organization behind the demonstrations, has been demanding territorial autonomy quite independently of the controversial administrative remapping of the region. Let me stress that the present Romanian government is dead set against giving territorial autonomy to the Hungarians. The Romanian constitution specifically states that Romania is a unitary state, one and indivisible. No Romanian government in the foreseeable future will sit down with any group to discuss plans for territorial autonomy. The Romanian government claims with some justification that in the last fourteen years the Hungarians in Romania have had wide cultural autonomy, not only in the territory inhabited by the Szeklers but everywhere a certain percentage of the population consists of Hungarians. Hungarians in Romania have their own schools, they can use their own language, and on the whole their situation is better than at any other time in the last eighty years. Therefore, launching a worldwide propaganda campaign for territorial autonomy is ill-timed and most likely counterproductive.

Then there is the problem with the so-called Szekler National Council itself. It is enough to look at the organization’s website to see that the leadership has very strong ties with Jobbik. For example, on October 25, it was triumphantly announced that “Jobbik joins the Great March of the Szeklers.” 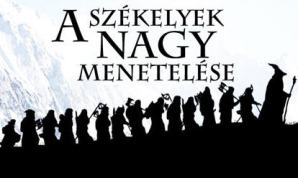 The Great March of the Szeklers

Yesterday I talked about the sympathy march that was organized by CÖF, the so-called civic organization that is in fact financed by the Hungarian government. But the really big event was a 55 km march between Ozun (Uzon) and Chichiș (Kökös) in Covasna county. It was called the Great March of the Szeklers. The organizers were expecting at least 100,000 marchers, some of them wearing the customary local folk costumes. Although we don’t have reliable numbers, by all accounts the crowd was enormous. Naturally there was also a Calvinist church service which was recorded by Duna TV, a state television station providing news for Hungarians in the neighboring countries. The Great March was broadcast by MTV, the public television station.

So the march drew thousands of Szeklers and got extensive media coverage. The problem is, however, as Ara-Kovács points out, that the organizers don’t have clear ideas about what kind of autonomy they really want. “The only thing that is clear is that they want to live their lives without the Romanians.” And surely this is neither desirable nor possible.

Meanwhile in Budapest a sizable crowd, organized by so-called civic organizations and Fidesz, had their not so great march from Heroes’ Square to the Romanian Embassy on Thököly út where the right-radical and anti-semitic Zsolt Bayer, one of the founders of Fidesz, was among the speakers. Some of the demonstrators sent a message to the Romanians inside of the embassy: “The land of the Szeklers doesn’t belong to Romania!” Well, it does and it will.