Although I’m going to talk about a historical research institute today, this post is not really about history. Far from it. It is about politics. Dirty politics. About a government that wants to recast recent political events in the light of its own ideology. About the falsification of history, if you want.

What am I talking about? The Orbán government set up yet another research institute, this one under the direct control of the Office of the Prime Minister. Viktor Orbán himself chose its first director. The institute, with the cumbersome name Rendszerváltás Történetét Kutató Intézet és Archívum (Research Institute and Archives for the Study of the Regime Change), will have 20 associates and a budget of 360 million forints just for the next six months. According to some articles I read on the subject, there was only one application for the director’s position that was submitted according to specifications, that of Zoltán Bíró, a literary historian whose field of study is Endre Ady’s poetry.

Who is this man? Those who aren’t familiar with the cast of characters in the regime change or aren’t diligent readers of Magyar Hírlap or don’t watch Echo TV might never have heard his name. Zoltán Bíró likes to describe himself as “the first chairman of Magyar Demokrata Fórum (MDF).” Almost every article about him and his new institute describes him as such. Actually, the first chairman of MDF was József Antall, who was elected to the post in October 1989. Bíró was managing director of the party between March and October 1989.

He had another occasion to become well known in those years. In April 1988 he together with Mihály Bihari, later chief justice of the Constitutional Court, László Lengyel, economist and publicist, and Zoltán Király, a journalist, was expelled from MSZMP. The four told their sad tale in a book entitled Kizárt a párt (I was expelled from the party).

Bíró’s political views are of the far-right variety. He is also an expert on weaving elaborate conspiracy theories. He has a chip on his shoulder because after the appearance of József Antall he lost his bid for party leadership. He began circulating stories in which he intimated that perhaps József Antall “was sent by someone” and those someones might have been the communists who found in Antall a man with whom they could do business.

Contemporaries describe Bíró as a man who sowed the seeds of mistrust and later even hatred between the narodnik-populists (népi-nemzeti) and the urbanites, whom he liked to identify as Jewish intellectuals. According to Zoltán Ripp (Rendszerváltás Magyarországon, 1987-1990, 2006), Bíró accused them of disseminating false information about the gathering of men and women in Lakitelek, in the backyard of Sándor Lezsák, describing it as a meeting of anti-Semites. There were references to a New York Times article, but I couldn’t find it.

In any case, by 1991 Bíró left MDF and together with Imre Pozsgay, a high-level MSZMP politician, established the short-lived National Democratic Alliance. From the beginning it was clear that Bíró really didn’t want to dismantle the Hungarian communist party (MSZMP) but rather to forge an alliance between the “népi-nemzeti” members of MSZMP, like himself and Pozsgay, and the narodnik groups outside of the party that included such men as István Csurka, Sándor Lezsák, and Sándor Csoóri.

He remains a critic of the change of regime and the decision to work out the details of this new regime with all political forces, including the reform wing of MSZMP. Something went wrong, Bíró claims, and he thus rather forcefully rejects the whole period that resulted from that historic compromise. 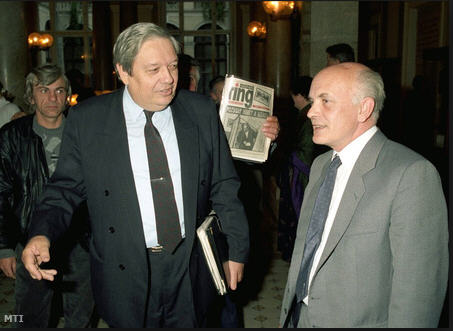 Imre Pozsgay and Zoltán Bíró at the Convention of the National Democratic Alliance, 1991 / MTI

I suspect, therefore, that he and his colleagues in this new institute will reject the very idea of real regime change in 1990. He will most likely claim that the communists actually preserved their rule intact. I furthermore assume that this interpretation will meet with Viktor Orbán’s approval, since he often talked about the past twenty or so years as chaotic and ideologically confusing. The line between dictatorship and democracy was not clear. I’m sure he would like to have it in writing, the product of “serious” research by a “recognized” historical institute, that real regime change came only in 2010.

János Kenedi, a historian of this period and a member of the democratic opposition in the 1980s, summarized the task of the institute as “to show that Orbán’s view of the regime change is the correct one and that there was actually no regime change between 1987 and 1990.”

All that is bad enough, but according to Sándor Révész, Bíró is also no friend of western multi-party democracy. In his book entitled Saját utam (My own road), he makes that clear, expressing as well his hatred of liberals and liberalism. In 2009 in Magyar Hírlap he stated that Fidesz should even use “dictatorial instruments because one should honor and consider sacred the existence of the nation and not the doctrine of democracy and freedom.” So, concludes Révész, “the official history of the change of regime will be in the hands of someone who thinks that dictatorship is a suitable instrument in the service of the nation while democracy and freedom harms it.”

Another perfect appointment of Viktor Orbán. Another blow for historiographical integrity.