I almost missed the 24-hour-long police action in the nine districts of the left bank of the Danube, which means the entire Pest side of Budapest. Thousands of policemen worked diligently starting at “Sunday morning zero hour” to stop and search cars. These guardians of law and order had the authority to examine the clothing of the passengers and could search their cars looking for “instruments that may endanger public safety.” When reporters inquired why this heightened alert, the police refused to reveal the reason for what police jargon calls “increased inspection” (fokozott ellenőrzés).

It was twenty years ago that I first experienced similar Hungarian police tactics. I was riding with relatives when the car was pulled over for no good reason by two young policemen who wanted to see the driver’s license. I was somewhat shaken, but it turned out that this was common practice. Later an Internet friend reported that during a fairly short trip he was stopped three times. In any case, my relatives took the whole incident in stride.

These periodic checks of absolutely innocent drivers are annoying enough, but this latest full-scale “raid,” as Magyar Nemzet called it, is most likely unconstitutional. At least this is what the Hungarian Helsinki Committee thinks. On July 19 the organization, after a similar raid of a private club maintained by a Jewish youth organization, turned to Máté Szabó, the ombudsman, to inquire about the constitutionality of such police raids.

About a month ago the police stepped up its inspection of motorcyclists and bicyclists in Budapest, allegedly “because during the summer there are accidents every day that involve motorcycles and bicycles.” Twenty-five percent of those inspected were found guilty of breaking various rules and regulations. These inspections are ordered because the leaders of the Hungarian police force claim that  they serve the purpose of “reducing the number of crimes, preventing illegal activities and forestalling traffic accidents.” The fines, of course, also bring in much needed revenue.

When the Budapest police chief was asked the reason for this latest mega-inspection, he refused to divulge its purpose. According to Ferenc Krémer, an expert on police matters, not divulging the reason for police actions was “the customary practice of the Kádár regime.” In fact, a policeman who approaches a vehicle during these inspections must inform the passengers of the car of the purpose of his mission and ask for their cooperation. Naturally, in this case no such practice was followed because there was no declared reason for the search.

Now comes the question of what is considered to be a bodily search (motozás in Hungarian). It seems that according to the official police definition such a search includes bodily cavities, and it can be performed only in the presence of a doctor. However, the “search of clothing,” which is currently allowed, is also an intrusion because after all it entails what we call “frisking” in English–that is, searching  for something concealed, especially a weapon, by passing the hands quickly over clothes or through pockets. Well, to my mind this is also “motozás.” Searching the car is also questionable according to the Hungarian Helsinki Committee, especially since the European Court of Justice already made a ruling forbidding it in a case involving the U.K. police force. 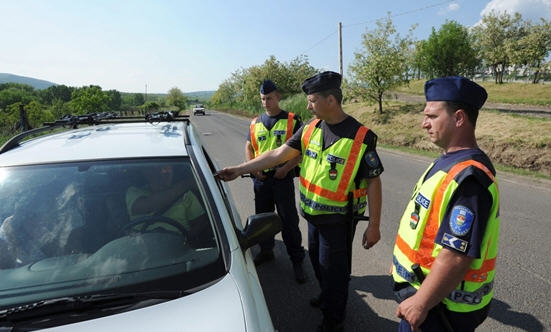 The argument that these periodic searches of people and cars are instrumental in crime prevention has no foundation. While the number of police actions has been steadily growing since September 2012 when the new national police chief took over, so has the number of crimes.

As I said, I almost missed this news, mostly because the Hungarian media didn’t pay much attention to it. A well known Hungarian journalist e-mailed me this morning complaining about the scant coverage. Given the secrecy and the large scale of the “increased inspection,” he suspects that the real aim of this and similar raids is intimidation. I wouldn’t be surprised if he were right.

Fidesz leaders have certainly used intimidation before. And here’s one small example from today. In a Miskolc hospital eight premature babies died over a short period of time. Viktor Orbán himself stepped in. He suspended the director of the hospital and personally ordered the police to investigate and darkly mentioned the possible role of the National Security Office in the case. I’ll bet that everybody in that hospital is shaking in their boots at the moment. It’s not every day that a prime minister suspends hospital personnel and orders a police investigation of an individual hospital’s practices.

The dark message? The police, the government’s enforcement agency, should be feared and the population should understand that “raids” can come at any time, with no probable cause required and no justification necessary. This kind of intimidation belongs in a police state, not in a democracy.