Yesterday, right after Angela Merkel’s plane left the runway at the Budapest Airport, I jotted down my first impressions. It was a busy day for the German chancellor, so I had to be very selective in my post. I concentrated on Merkel’s comments, largely because they were the most unexpected elements in the exchange. Moreover, I talked mostly about her reactions to Hungarian domestic issues and spent a great deal less time on the disagreements between the two leaders over foreign affairs.

Let’s start with their attitudes toward Putin’s Russia. According to Orbán, Ukraine is important for Hungary because it is a neighbor of Hungary, because there is a Hungarian minority across the border, and because the gas that Hungary needs badly travels through this country. Therefore, he said, Hungary “can stand only on the side of peace. We can imagine only a solution that will take us toward peace.” But let’s see what Merkel had to say. According to her, the Germans would also like to have a ceasefire and political stability in Ukraine that “can guarantee the territorial integrity of the country.” Something Orbán didn’t talk about. Merkel also gently reminded Orbán that Hungary is not the only country that is dependent on Russian gas, indicating that it is unacceptable for Hungary to have a different viewpoint on the question of Russian sanctions.

That last remark from Merkel prompted Orbán to open a discussion with his guest on Hungary’s unique position in this respect. Germany’s situation cannot be compared to that of Hungary; “one must take Hungary’s situation vis-à-vis Russia very seriously.” Hungary has to renew her long-term agreement on the price of gas for the next fifteen years, and therefore “it is difficult to fully support the Russian sanctions.”

Although yesterday I talked about their disagreements over the meaning of democracy, I said nothing about how the topic came up during the press conference. Orbán naturally did not bring it up; it was Merkel who announced that during her conversation with Orbán she “indicated that although the Hungarian government has a large majority, in a democracy the role of the opposition, the civil society, and the media is very important.” She added that later she will find time to have a conversation with the leaders of Hungarian civil society. From Orbán’s reaction it was clear that the Hungarian prime minister did not expect such direct involvement by Merkel in a matter he considers a domestic issue. It was after these points of disagreement that Merkel and Orbán had their rather sharp exchange on the nature of “illiberal democracy.” As the Frankfurter Rundschau pointed out, Merkel can at times be quite “undiplomatic,” as she was this time, and therefore “she annoyed Orbán.” You can see the prime minister’s annoyance and his determination to follow his own path on the picture below, taken during their debate on “illiberalism.” 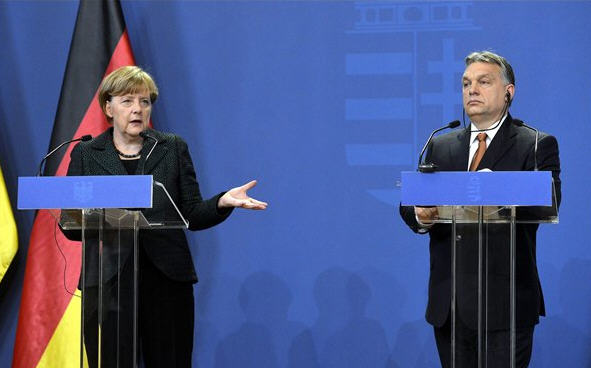 Csaba Molnár,  the number two man in the Demokratikus Koalíció, thought that Orbán was cowed and “behaved like a scared little boy standing by his teacher’s side.” I disagree. I saw exactly the opposite: a combative Viktor Orbán who will not be swayed by any argument and who will continue to build his illiberal state. I’m afraid the same might be true when it comes to negotiations with Vladimir Putin. Even though he might sign on to further sanctions, he will try to make a deal with Putin regardless of EU disapproval. It is another matter whether Putin will swallow a big one and give preferential treatment to Orbán despite the meager returns he can expect from Budapest.

As even the right-wing media had to admit, the visit was not a great success, although it was designed to be a showcase of German-Hungarian friendship and a stamp of approval by the German chancellor of the Orbán regime. What does Fidesz do in such an awkward situation? After all, they cannot admit that Merkel and Orbán disagreed on almost everything, starting with Russia and ending with the nature of democracy. The simplest and the usual Fidesz response in such cases is to resort to outright lying. This is exactly what happened today.

Vs.hu is a relatively new internet news site that came out with the startling news that the real significance of the conversation was in the realm of new German investments in the Hungarian economy. András Kósa, a well-respected journalist who used to be on the staff of HVG, just joined Vs.hu. He was told by unnamed members of the government and local German businessmen that although on the surface there was visible friction between Merkel and Orbán, in fact “concrete important industrial agreements came into being on Monday.” Siemens will be involved in the construction of the Paks Nuclear Power Plant. In addition, Hungary will buy thirty helicopters from Airbus, not from the American Sikorsky or the Italian-British AgustaWestland. Kósa was told that “BMW is contemplating opening a factory in Hungary.” Only the exact location remains to be settled. And, on top of everything else, Mercedes will build a new factory to manufacture a new model.

Well, that was quite a scoop. The Hungarian media went crazy. Dozens and dozens of articles appeared within minutes, and every time the story was retold it became grander and grander. While the original article emphasized that all these favorable developments “might happen,” by the time the story got to Magyar Nemzet it became “Gigantic German investments are forthcoming as a result of the Merkel-Orbán meeting.” Válasz discovered that the real significance of the meeting was that new “gigantic German investments are coming to Hungary,” obviously all that taken care of during a short luncheon. Even such a reputable site as Portfolio.hu fell for the story.

The first word of warning came from a specialized internet site that deals with the car industry, Autopro.hu. It is possible that economic relations were discussed, but it is impossible that there could be negotiations between Merkel and Orbán regarding concrete projects, the author of the article remarked. This is not the first time that the possibility of a BMW factory is being heralded by the Hungarian media, but nothing ever came of it. Moreover, if there are such plans or decisions, they would not be discussed by Merkel and Orbán but by the top management of BMW and Hungarian economic experts. Autopro.hu didn’t manage to get in touch with BMW, but they were told by Mercedes that at the moment they have no intention of building another factory. Later the pro-government Napi Gazdaság  learned from BMW headquarters that “the BMW Group has no plans to build a factory in Hungary.” I don’t know whether the rest of the story, about Siemens and Airbus, is true or is also a figment of the imagination of certain government officials.

I consider Kósa a reliable and serious journalist who would not make up such a story. But why would government sources leak information about nonexistent projects? What do these so-called high government officials think when they concoct stories that are bound to be discovered to be false? Perhaps they think that the false news will spread like wildfire, as it did in this case, and that the correction will be reported by only very few media outlets. Therefore, it can be considered a successful communication stunt. Fidesz is good at that.