As I was searching for news on Péter Szijjártó, I found the following very funny headline on a right-wing site I had never heard of before called Jónapot kívánunk (We wish you a good day): “Péter Szijjártó will meet Fico in our old capital.” Why is it so funny? Because from the eighteenth century on the Hungarian nobles complained bitterly about the Habsburgs’ insistence on having the capital in Pozsony/Pressburg, today Bratislava, instead of the traditional center of the Kingdom of Hungary before the Turkish conquest, Buda. Pozsony/Pressburg was closer to Vienna and more convenient for the kings of Hungary to visit when the diet convened, which was not too often.

This trip to Bratislava is Szijjártó’s first since he became minister of foreign affairs and trade. During his quick trip he met Miroslav Lajčák, Slovak foreign minister and deputy prime minister, and Prime Minister Robert Fico. In the evening he visited the headquarters of Fidesz’s favorite Hungarian party in Slovakia, Magyar Koalíció Pártja (KMP). Fidesz politicians judiciously avoid Béla Bugár, co-chairman of a Slovak-Hungarian party called Híd/Most, meaning bridge. This party is not considered to be a Hungarian organization because its leadership as well as its voters come from both ethnic groups.

The encounter between Lajčák and Szijjártó must have been interesting: the Hungarian minister a greenhorn and Lajčák a seasoned diplomat, graduate of both the State Institute of International Relations in Moscow and the George C. Marshall European Center for Security Studies in Garmisch-Partenkirchen, Germany. Just prior to meeting Szijjártó, Lajčák attended the conference organized by the Center for European Policy Analysis’s U.S.-Central Europe Strategy Forum in Washington and offered some introductory words following Victoria Nuland’s keynote address. This is the conference where the Hungarian participant, Zsolt Németh, had to withstand a barrage of criticism of Viktor Orbán’s government. 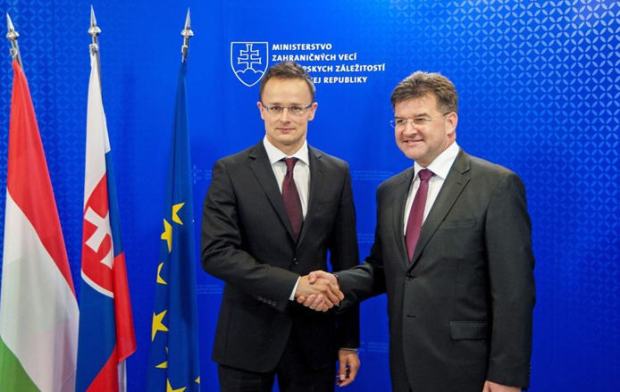 Szijjártó stressed the “strategic importance” of Slovak-Hungarian relations as the reason for his early visit to the Slovak capital. Mind you, “strategic importance” has become an absolutely meaningless concept in Hungary since 2010 since the Hungarian government signed perhaps 40-45 agreements of strategic importance with foreign firms. Szijjártó also pointed to “the success stories” shared by the two countries, such as cooperation in energy matters. The direct pipeline between Slovakia and Hungary is scheduled to open in January, although you may recall that before the election in April both Robert Fico and Viktor Orbán were only too glad to participate in a ceremony that gave the false impression that the pipeline was already fully functional. Most of the infrastructure projects, including roads and bridges, along the Slovak-Hungarian border are still in the planning stage.

Besides all the good news Szijjártó also talked about “hot topics” that should be discussed without “taboos.” Of course, what he meant was the Slovak law that bans the country’s citizens from having dual citizenship. This amendment to the original law on citizenship was designed to counteract the Hungarian decision to offer citizenship to ethnic Hungarians in the neighboring countries.

Miroslav Lajčák found the exchange “fruitful.” The Slovak journalists were less charitable and kept asking Szijjártó all sorts of embarrassing questions. For example, about the Hungarian fiasco in Brussels yesterday and about the delay in the construction of several bridges, one on the Danube between Komárom and Komarno and others across the Ipel’/Ipoly river. Construction of these bridges was supposed to begin three years ago. In brief, not much has materialized up to now that would constitute a true success story in Slovak-Hungarian cooperation. It seems that building football stadiums is much more important than constructing bridges across a very long river that defines in large part the Slovak-Hungarian border.

The day before his departure to Bratislava Szijjártó gave a lengthy interview to Origo. Here is a man who claims that old-fashioned diplomacy is passé and that he is primarily interested in foreign trade. After all, 106 commercial attachés will soon be dispatched to all Hungarian embassies, and some embassies will have multiple commercial representatives. Yet practically all the questions addressed to Szijjártó were of a diplomatic nature. For example, what about the rather strained bilateral relations between Romania and Hungary? The answer: “I recently met the economic minister of Romania. Our personal relations are good. And naturally I am ready to have talks with the Romanian foreign minister. I believe in reasonable dialogue.”

Or what about the Visegrád Four and their diverging attitudes toward Russia? They are allies, Szijjártó asserted, which lends a certain strength to their cooperation. They hold different views, but that in no way negatively influences their relationships. “As far as the Ukrainian-Russian conflict is concerned, we must not forget that there are 200,000 Hungarians in Subcarpathia and that Russia is our third most important commercial partner.” What is happening now is injurious to Europe; speedy negotiations are in everybody’s interest.

As for the United States, all unjust criticism must be rejected and Hungary must make clear its point of view. “General government control of the Hungarian civil sphere is without any foundation.” I call attention to a slight change in wording. Szijjártó here is talking about “general control,” which strictly speaking is true. The control is not general. Only those NGOs that are critical of the government are intimidated and harassed. Where does Barack Obama get his information about Hungary? “I have no idea, but those who talked to him didn’t tell the truth.”

And finally, the journalist pointed out that very few important foreign politicians have visited Hungary lately and asked Szijjártó whether that might mean that Hungary has been isolated in the last four and a half years. Szijjártó found such an accusation laughable. He said that he spent four years “right next to the prime minister and therefore I could see in what high esteem the prime minister is held  abroad.” So, all is well. Hungarians don’t have to worry. Their prime minister is Mr. Popularity among the leading politicians of the world.