Although in the last half an hour several  short news items appeared about the Demokratikus Koalíció’s “offer” to the leadership of MSZP, I would rather wait a day until we know a little more about the details. Instead, I will talk about the beginning of the school year. It was at 8 a.m. this morning that the 2013-14 school year officially began. In most schools there was an opening ceremony, which has become something of a ritual in Hungarian schools.

In my days the beginning of school was not such a big deal. We packed up and went to school. That was all. But in Hungary it is now an all-national affair. Ministers, undersecretaries, mayors, and other politicians feel compelled to give long speeches to bored students and their teachers. This year even the prime minister honored a newly refurbished school with his presence.

One must keep in mind that the coming school year will be drastically different from what students and their parents have become accustomed to. Schools are no longer run by the municipalities but by the state. Teachers are employees of the state and new principals were appointed by Rózsa Hoffmann, the undersecretary in charge of public education.

The very structure of the educational process has also changed. From here on children cannot leave school before 4 p.m. That blanket rule would have made private lessons for children well nigh impossible. However, after some hesitation the ministry allowed principals to grant exemptions if they feel that the request is  justified.

The amount of material teachers have to cover was far too great even before, but from this year on students will have to memorize even more “stuff.” In first grade there used to be only four hours of classroom work, but henceforward six-year-olds will have to spend five periods learning the three Rs. In grade five children used to receive 22.5 hours of instruction, but from here on it will be 28 hours. In grade nine instead of 27.5 hours of instruction the children will receive 35 hours! I think that is horrendous. After listening to a teacher drone on hour after hour, who will be able to actually think about the course material? In addition, daily gym was introduced in grades one, two, five, nine, and ten although apparently there is not enough gym capacity in most schools to offer that many daily classes. And either religion or ethics must be taught in grades one, five, and nine. Why this particular four-year cycle, especially since it coincides in part with the physical education cycle? I have no idea.

There have been a lot of complaints about the newly centralized distribution of textbooks. According to government announcements, all went wonderfully. Critics of the system, however, talk about chaos.  The new distributor often just dumped the books at the gates of the schools, leaving it to teachers and students to sort things out. Apparently, they were not successful everywhere. I heard about a class of 22 where none of the kids managed to get the right books.

I also heard about one school where all the cleaning ladies were fired and the teachers were cleaning for a week to prepare the building for school opening. Naturally, Fidesz politicians and government officials are entirely satisfied with the results.

Orbán, in his speech in Törökbálint, announced that “schools have become over the years no more than repositories.” I wonder how the teachers who have been working pretty hard to educate the children, often under adverse circumstances and with very little pay, must have felt listening to the great leader telling them that they did nothing. They just kept the kids locked up inside four walls. I for one would have been furious. 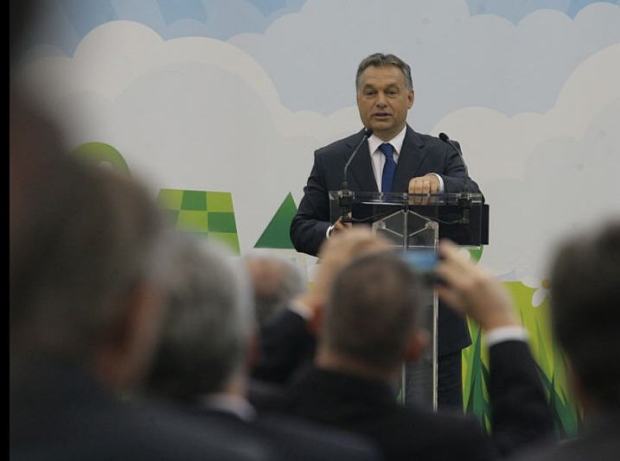 I also found some of Orbán’s remarks about physical education amusing. He claimed that daily gym classes are necessary “in order to awaken in the students their desire to be in proper physical shape.” Perhaps the chief football player should go back to school to rekindle his own waning desire for physical fitness.

Lajos Kósa talked without notes for sixteen minutes in one of the best gymnasiums in the country, the Árpád Tóth Gymnasium in Debrecen. According to the Népszabadság‘s stringer from Debrecen, his speech was not exactly welcomed by either the students or the teachers. As is his wont, Kósa made some rather unfortunate remarks. His first slip was: “TÁG [as everybody refers to the school] is one of the country’s best high schools. For that I would especially like to congratulate the school’s principal who has decided not to continue as principal but uhum, uhum, yes, Mr. Szabolcs Szilágyi, who will continue his work as a teacher in this school.”

There are only two high schools in the country that offer what is called “international matriculation.” If a student passes, he or she can attend the 300 best universities “from Oxford to Yale” without any further entrance exams. Under the former principal TÁG managed to achieve this status, but as of this year he was demoted and his place was taken by Mrs. Fenyős, Amália Kircsi. She and her husband Zoltán Fenyős are the authors of textbooks for grades five to seven.

Another Kósa gem was: “Good children perform well if they are beaten, but even the most talented child, if no one holds his hands, will get lost.”

And no one seemed to be amused when Kósa reminisced about his own school years in another Debrecen gymnasium where the students tried to guess how many of their fellow students would faint because they had to stand throughout this joyous occasion. Normally, their number was no more than four. Kósa was happy that no one fainted during his speech. It seems, he continued, that today’s youngsters are in better physical shape. Nobody laughed.