Yesterday I wrote that Péter Szijjártó, undersecretary in charge of foreign policy and foreign trade, has been working to develop close political and economic partnerships with three former Soviet Republics–Belarus, Uzbekistan, and Turkmenistan.  The prime minister’s office, a huge administrative unit with hundreds of politicians and bureaucrats, is not exactly diligent about informing the public of Szijjártó’s doings. In fact, the first bit of news I discovered appeared in a paper dealing with sports.

The president of the International Weightlifting Federation is a Hungarian, Tamás Aján, who is also secretary-general of the Hungarian Olympic Committee and a member of the International Olympic Committee. He was visiting Tashkent on the occasion of the world championship of youth weightlifters that was held in the Uzbek capital. Islam Karimov, president of Uzbekistan, invited Aján for a private audience. After a long talk it became evident that the Uzbek dictator would like an arrangement whereby Uzbek athletes could train in Hungary. One of Karimov’s daughters is especially active in promoting education and sports for youngsters. Hence, I guess, the interest. 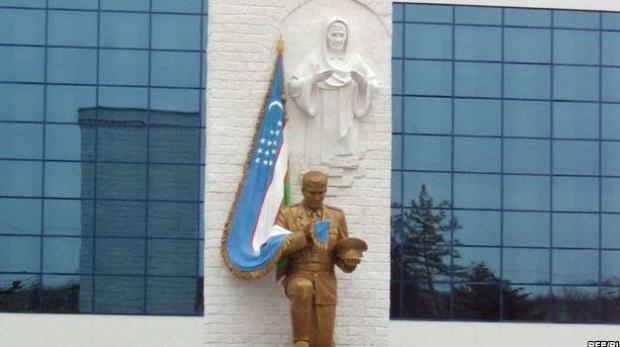 Statue that replaced the memorial to a Soviet soldier: Oath to the Motherland, Tashkent

As for Karimov himself, he is an outright dictator who wins elections with 90-95% of the votes after he makes sure that no other party can participate in the elections. During the Soviet period he was a party apparatchik who eventually became the party’s first secretary in Uzbekistan in 1989. After Uzbekistan became an independent nation, he won the first presidential election in 1991 and has been in that position ever since.

A month after the weightlifting story Magyar Nemzet described the “Eastern Opening” as a “rumbling”  while ” we flirt with Uzbekistan.”  It turned out that Vladimir Norov, the first deputy foreign minister of Uzbekistan, came to Hungary to confer with Péter Szijjártó. According to Szijjártó’s press secretary, the Hungarian side emphasized that Budapest wants to have “close cooperation with the Middle Eastern countries.”  Hungary will extend a loan to Uzbekistan that would enable Hungarian firms to modernize the lighting of Uzbek cities. In addition, the Hungarian government would financially assist the export of Hungarian medical equipment. There will also be student exchanges and stipends to go with them. And Hungary will supply irrigation systems for the Uzbek agricultural sector.

Uzbekistan is a politically isolated country. At the moment Hungary has no embassy, consulate, or even honorary consul in Tashkent. But I have the feeling that it will not be long before Hungary joins the odd assortment of countries with embassies in Uzbekistan.

There has been even less news on Turkmenistan in the Hungarian media. I found that at the end of March Gulsat Mammedowa, minister of education, was in Budapest and conferred with Zoltán Balog, minister of human resources. The topic was cooperation on higher education. Balog emphasized that Hungary is ready to engage in joint projects in education and in the field of science. They agreed that a bilateral agreement will be signed to that effect.  The Turkmen minister of education also had conversations with Rózsa Hoffmann and István Klinghammer, two of the undersecretaries in charge of education within the ministry of human resources.

The history of Turkmenistan since the early 1990s is very similar to that of Uzbekistan. It is a single party state that was ruled by president-for-life Saparmurat Niyazov until his death in 2006. Niyazov was a former bureaucrat of the Soviet communist party who in 1985 became the head of the Communist Party of the Turkmen SSR. He retained absolute control over the country even after the dissolution of the Soviet Union. Gurbanguly Berdimuhamedow followed him in 2007. Although he is also a dictator, he’s made tentative steps toward establishing more contacts with the West. The former communist party is now known as the Democratic Party of Turkmenistan and is the only one effectively permitted to operate. Political gatherings are illegal unless government sanctioned. Hungary has no diplomatic relations in Ashgabat. But, once again, I assume there will be if Orbán is around for another four years.

To give you an idea of the kind of country Turkmenistan is, consider this story. The president is crazy about horses and horsemanship. On May 1 there was a horse show where he himself also rode. In the finish Berdimuhamedow fell off his horse. The television station was forbidden to show his fall and pictures taken on the spot by reporters were confiscated. Even ordinary spectators had to hand over their pictures. Security men came and took him away. For half an hour there was deadly silence in the stadium. There were some who cried. However, forty minutes later, as if nothing had happened, Berdimuhamedow showed up dressed in a national costume. Amid great applause he took the top prize money of $11 million as the winner of the race. (By way of comparison, the owners of the Kentucky Derby winner Orb took home $1.4 million.) I can’t ascertain whether he fell before the horse crossed the finish line or after.

Despite the Turkmen officials’ best efforts, the video ended up on YouTube.

On May 15 Péter Szijjártó, undersecretary in charge of foreign policy and foreign economic relations, received three new jobs from Viktor Orbán. He will be the chairman of the Hungarian-Belarussian, Hungarian-Turkman, and Hungarian-Uzbek bilateral economic councils. Following the announcement, Szijjártó’s spokeswoman emphasized that “economic cooperation with the former Soviet member states are the foundation pillars of the government’s strategy of the Eastern Opening and therefore the government will pay special attention to bilateral relations with Belarus, Turkmenistan, and Uzbekistan.'”

Uzbekistan is described by Amnesty International, Human Rights Watch, and the U.S. Department of State as “an authoritarian state with limited civil rights” in which there is “wide-scale violation of virtually all basic human rights.” Turkmenistan’s record is no better. Its government operates as a single party state. The country has been widely criticized for human rights abuses and has imposed severe restrictions on foreign travel for its citizens. According to Reporters Without Borders 2012, Turkmenistan had the second worst press freedom conditions in the world, just behind North Korea. Belarus is described as a dictatorship and has been barred from the Council of Europe since 1997.

So, these countries are the pillars of Viktor Orbán’s “Eastern Opening.” Nice company Hungary is keeping. Clearly, the Orbán government is ready to cooperate with countries with natural resources. Both Turkmenistan and Uzbekistan have extensive natural gas reserves and phenomenal economic growth. Belarus, on the other hand, seems to be in constant economic crisis; occasionally Putin’s Russia helps the country out with large loans.

Not much appeared in the Hungarian press about Belarus before November 2012 when HVG reported that Alexandr Lukashenko, the country’s president, announced that “the Hungarians seemed to have had enough of democracy and market economy. They sobered up.” He recalled that in the good old Soviet days the two countries were friends, and he expressed his belief that the two countries will strengthen their ties in the near future. “We cannot lose Hungary.”

That exchange between the Belarus president and the new Hungarian ambassador to Minsk made quite a splash in Budapest. Árpád W. Tóta, a commentator known for his verbal virtuosity and keen sense of politics, had a grand time with Lukashenko’s description of Hungary’s undemocratic ways, adding that Hungary is nowhere close to Lukashenko’s Belarus but “we are coming along nicely.” According to András Giró-Szász, government spokesman, Lukashenko “was only joking.”

By February 2013 the Hungarian media learned, again through the Belarussian Telegraph Agency, that Belorussian officials carried on negotiations at the time when the Agro Mash Expo 2013 was being held in Budapest about Hungary’s importing more Belarussian agricultural machinery, especially tractors. Already in 2011 Hungary purchased 973 tractors from Belarus for $16.6 million. 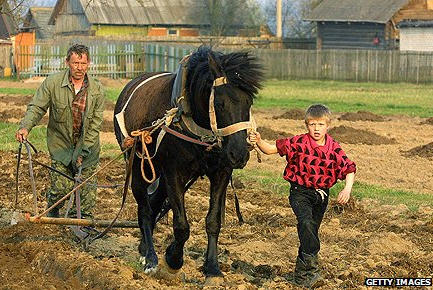 Belarus agriculture: it seems that the tractors are being exported  www.bbc.co.uk

On May 1, 2013, Fidesz’s official website announced that Péter Szijjártó met Alena Kupchina, Belarus deputy foreign minister, in Budapest. They discussed setting up direct flights (Minsk-Budapest-Belgrade) that would “encourage economic and cultural relations between the two countries.” The two agreed that, as of the coming academic year, Hungarian will be taught at the University of Minsk. Further plans call for close cooperation in pharmaceutical research and development.

I was somewhat baffled that the same Alina Kupchina who met Szijjártó on May 1 was again in Budapest on May 6 when she met with two senior officials of the Hungarian Foreign Ministry, Zsolt Németh and Péter Sztáray. She came specifically for a “foreign policy consultation.” Németh at least brought up Hungarian concerns over the Belarussian human and political rights situation. He asked for the release of political prisoners because “this would assist Belarus’s more active participation in the work of the Eastern Partnership.”

Tomorrow I will continue with the other two “pillars” of Hungary’s Eastern Opening: Uzbekistan and Turkmenistan.