The title of yesterday’s post was “The Hungarian government turns up the heat on the NGOs.” Well, today it took on both the United States and the European Union.

After some initial hesitation when János Lázár profusely praised the United States and extolled the friendship between the two countries, it seems that the decision was reached within the closest circle around Viktor Orbán that Hungary will not be “intimidated” by anyone. Hungary will strike back. Within a day Lázár was instructed to change his tune and attack the evil United States. Although he hid his message to the United States on the website of his hometown, Hódmezővásárhely, by today all the nationwide papers and internet sites reported on Lázár’s new attitude toward the United States and the European Union. He accused the United States of treating Hungary like an unequal partner and alluded to the so-called “gendarme pertue,” a reference to the practice during the Horthy period according to which the gendarmes used the familiar form of address with the peasants while the rural inhabitants had to use the formal with the gendarmes.* Being loyal to the European Union does not mean being a yes-man. Budapest is a faithful ally of Washington–and not because it dares not demand proof of serious allegations.

National holidays always come in handy for politicians, and the anniversary of the 1956 October Revolution couldn’t have come at a better time. In the last couple of days several top politicians linked the events of 1956 with the current crisis. Lázár illustrated the democratic impulses of Hungarians by appealing to the 1956 events. Who would ever question the Hungarians’ total commitment to freedom and democracy? But the Hungarians were let down by the West. “If October 23 is the glory of the Hungarians, then November 4 is the shame of America and Western Europe.” Hungarians were duped and abandoned so often that by now they are extremely cautious. In his opinion, “the bankruptcy of the regime change is demonstrated by the fact that the slavery of the East was replaced by the tutelage of the West.” This happened because in the last twenty years Hungary had political leaders who did not represent the interest of the country but who stood for foreign interests within Hungary. “In 1990 Hungarians regained their freedom but they needed twenty years more to dare to exert their rights. Well, now we dare!… We are responsible for our lives but at the same time we have the right to live our lives on our own terms.” At the end of this declaration of war, Lázár expressed his belief that the world will understand the Hungarian position and will slowly accept this new reality. “We ask only what is our due: neither more nor less.” 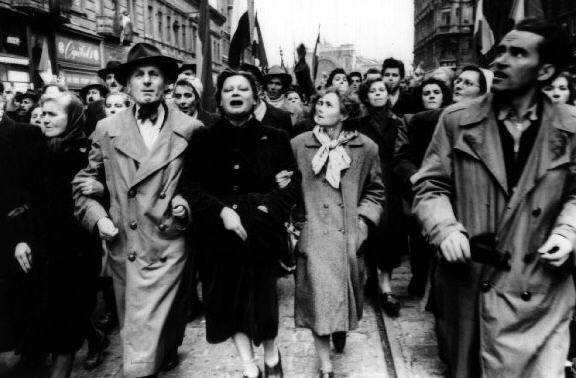 Lázár’s note was followed by László Kövér’s even more specific references to Hungary’s possible new course. In an interview on the far-right Echo TV Kövér ruminated on Hungary’s relation to the European Union. For him it was the Tavares report that was the last straw because the European parliament “thinks they can tell us how to behave. In this respect Brussels reminds me of Moscow. It was customary in Moscow to call together the party secretaries of the socialist camp and publish joint communiqués … in which they told us what the member states can and cannot do. If that is the future of the European Union, then it is worthwhile to contemplate that perhaps we should slowly, carefully back out.” He quickly added, “I’m convinced that this is just a nightmare and that this is not the future of the European Union, although some people seriously think that the EU should move in this direction.”

Even the staff of Mandiner, a gathering place of the younger conservative generation, thought that drawing a parallel between Moscow and Brussels was “stupid.” And the author of the article listed some of the fallacies in Kövér’s contention. It was our sovereign decision to join the Union; we are members of the EU and not subjects as in the Soviet bloc; we can veto certain decisions unlike in the old days; there are no occupying forces in the country; we receive more money from the EU than we pay in; and finally, one of the official languages of the EU is Hungarian, while during the Kádár regime Russian was compulsory.

The last attack on the United States came from Gergely Gulyás, one of the few smart politicians in an otherwise intellectually undistinguished party. He was in Berlin when he delivered a speech at the Hungarian embassy on the Hungarian revolution of 1956. After a historical overview of what happened to Hungary between 1945 and 1990, he went straight to the question of democracy in Hungary. There can be no question that for the Hungarians “democracy is a sacred value for which they shed their blood.” The memory of the revolution is an eternal reminder that Hungarians live in a country of laws which are written down in the constitution. “Our freedom of today springs from our revolution of 1956.”

Well, it was here that I could hardly retain my composure. These people try to justify their undemocratic, illegitimate regime by appealing to the blood and sacrifice of the revolutionaries of 1956. And that is not all. He had the temerity to claim that those who question the existence of democracy and the rule of law in Hungary insult the memory of the heroes of the revolution.

Meanwhile, on another front, The Hungary Initiatives Foundation, which operates in the United States as a propaganda arm of the Orbán government, has lost almost half of its board members. Those who left are George E. Pataki, former governor of New York; Dr. Katrina Lantos Swett, daughter of U.S. representative Tom Lantos and vice chair of the United States Commission on International and Religious Freedom; Susan Hutchison, executive director of the Charles Simonyi Fund for Arts and Sciences; and Michael J. Horowitz, former director of the Hudson Institute’s Project for Civil Justice Reform and its Project for International Religious Liberty as well as a founding member of 21st Century Initiatives. Those remaining are former American ambassdor April H. Foley; Tamás Fellegi, a former member of the Orbán government; Dr. John P. Lipsky, former first deputy managing director of the IMF; Ambassador Kurt Volker, executive director of the McCain Institute for International Leadership; and Edith K. Lauer, chair emerita of the Hungarian American Coalition. Even among the remaining five we see some dissent. Kurt Volker, who used to be a steadfast supporter of Viktor Orbán, had some very harsh words about the latest Hungarian development in an interview with Péter Morvay in Washington.

Ágnes Vadai of the Demokratikus Koalíció reacted to the László Kövér interview by saying that anyone who wants to lead Hungary out of the European Union is “an enemy of the country.” As are those who blaspheme the memory of 1956.

*Apparently, gendarme pertu also means a slap in the face by the officer instead of greetings.