Yesterday 1240 delegates gathered in Millenáris Park for Fidesz’s XXV Congress. It was supposed to be held earlier, but the flood that threatened Hungary in the spring intervened. After all, the chairman of the party was busily organizing a defense against the elements.

For a number of years now there has been only one candidate for the post of chairmanship, and that person is naturally Viktor Orbán. Yesterday only a single delegate dared to express his or her dissatisfaction with Viktor Orbán’s leadership by voting against him. Otherwise, there was unanimous, enthusiastic support for the achievements of the party and the government.

By now we are accustomed to increasingly outlandish speeches by the prime minister, and once again he didn’t disappoint us. It seems that the worse the Hungarian political and economic situation is, the shriller Orbán ‘s speeches are.

The war of independence has been the center of his politics over the last three years, but now Orbán extended this war beyond banks, multinationals, and European bureaucrats. Now he is also targeting “the former communists who sold the country to the banks and the multinationals.” Fidesz must win the election because naturally the politicians of the current opposition would do the same again if given the opportunity. The coming election will be a struggle about the future. Whether the Hungarian people want to be “the servants of Europe … the banks and the large corporations … or [ whether they] will be their own masters.” These few sentences give a fair introduction to the speech as a whole. And let me add that the audience was in ecstasy. They loved every word of the speech. The more outlandish the better.

The man who was a purported champion of truthfulness while in opposition now feels free to blatantly disregard the truth. As they say in Hungary, not even his interrogatives are true! He has rewritten his and his party’s history several times, and he treated the party congress to yet another twist of the truth. Orbán began his speech by explaining what the 1990 Fidesz campaign slogan meant. The slogan used the first line of the Hungarian translation of Roxette’s song “Listen to your heart”: “Hallgass a szívedre, szavazz a Fideszre” (Listen to your heart, vote for Fidesz!). It was catchy, in part because it rhymed. There was no more to it. But Orbán came up with a novel explanation to fit in with his current campaign platform. According to him, the slogan meant that “we don’t allow anyone to dictate to us.” I’m afraid one needs an extraordinary amount of imagination to come up with such an interpretation. But to his audience it didn’t matter. 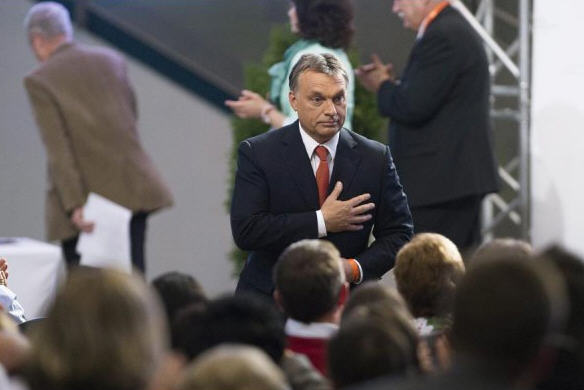 Viktor Orbán is listening to his heart / MTI/ Szilárd Kosztics

So, if someone starts a speech with a historical fabrication what can one expect from the rest? Not much. According to him, Hungary’s economy is in great shape. When Fidesz took over, the situation was terrible. The socialist-liberal governments ruined the country. When trouble came, “one of the leftist captains” jumped ship while they madly searched for his “brave successor.” It took a long time to find him, but once he became prime minister he introduced one austerity program after another. After his ruinous premiership “he took French leave and actually left the country.” The only reason that so many people are suddenly interested in being prime minister is that now “Hungary performs better, it is stronger than before and won many important battles.” Of course, he was talking about Ferenc Gyurcsány and his “cowardly” successor, Gordon Bajnai, who left the country in shambles. As we know, the Hungarian economic situation then was a great deal better than it is today.

Orbán is expecting an onslaught from the “honey-tongued bankers, the large, international monopolies, their supporters among the bureaucrats of Brussels and their domestic varlets.” This attack on Hungary will be forthcoming as the result of the Orbán government’s second lowering of utility prices that will be enacted into law shortly. “They will do everything in their power to prevent this from happening because we are talking about trillions, huge investments, and guaranteed profits. We are talking here about the real heavies in the field who are ready for anything.”

The Hungarian opposition extends a helping hand to these bankers and multinationals against their own people who are being defended only by Fidesz and the current government. He asked his audience never to forget that “the former communists gave away the country to the speculators, bankers, and multinationals.” Some people claim that all the talk about communists is nonsense because there are no communists in Hungary. “After all, they are younger than we are. Perhaps. But where there are dinosaurs there are also baby dinosaurs.” An interesting concept: the alleged communists are being accused of working for the capitalists–for the bankers and the multinationals. But it seems that Orbán’s audience didn’t find this jarring. They loved it.

The last few minutes of the speech were spent on the coming elections. This election must be won. Every vote counts and all pro-Fidesz votes must be cast. He urged his audience to work very hard because “we will win but only if we rise up to the task.” As a farewell message he added that Fidesz supporters owe him that much because, after all, he devoted twenty-five years for the cause which must be continued. It almost sounded like a threat: if you don’t work hard enough and we lose the election, it will be your fault and the ruin of me.

This speech was delivered a couple of hours before the announcement of the Kecskemét court’s ruling that indeed there were irregularities at one of the polling stations in the Baja by-election and that voting there must be repeated. I have no idea whether Orbán expected such an outcome because some of the judges in Kecskemét have the reputation of having warm feelings toward the current government. But even without this ruling it must have been clear to Orbán that next year’s election might not be a cakewalk for Fidesz even with all the obstacles they managed to build into the electoral system. Lately, the opposition has been doing quite well in traditionally right-wing districts even if not in the polls. As I mentioned earlier, the abrupt cancellation of Orbán’s visit to Baja indicated that Fidesz campaign strategists had an inkling that the party might be handed a defeat.

So, Orbán’s strong emphasis on the election and urging the party faithful to put all their energies into the campaign indicate a certain fear that the actual situation is not that rosy. That’s why the volume is being turned up, appealing to the population by attacking the bankers, the monopolies, the plutocrats, and capitalism in general. This speech could have been delivered by Mátyás Rákosi, as the Demoktratikus Koalíció rightly pointed out.